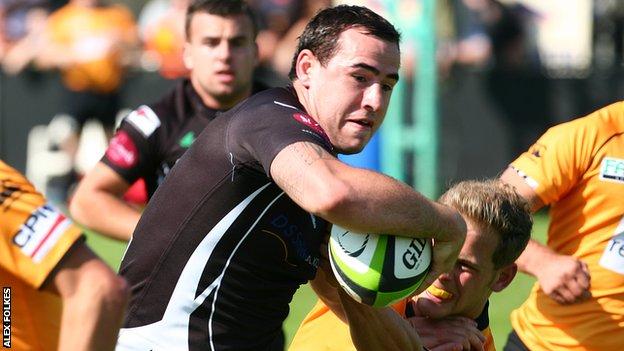 The Cornish All Blacks twice came from behind in the first half to secure a win which sees them stay seventh.

"I couldn't have asked more of the guys, we showed a lot of guile and lot of courage to put a result like that in," Rainford told BBC Radio Cornwall.

"It was a real mature effort from the guys and I'm really happy."

Hartpury took the lead in the first minute as Chris Fortey went over but Jake Murphy made it 5-3 with a drop goal shortly after.

Cozens scored another penalty to regain the lead for the hosts before Kieron Lewitt kicked two penalties in quick succession as Launceston went into half-time with a 16-10 lead.

Hartpury had James Head sin-binned just after the restart and Launceston took advantage as Paterson got his second try.

But when Josh Lord saw yellow on 57 minutes Hartpury got a try of their own thanks to Seb Rodwell before Jake Murphy's drop goal with 15 minutes left sealed the 26-18 win.

"The victory came from our defensive effort, we didn't give them anything to play with," Rainford said.

"We were good in defence and smart enough to let them make the mistakes and capitalised on them when we got the ball.

"There's a real sense of camaraderie in the side and it's getting better every week."