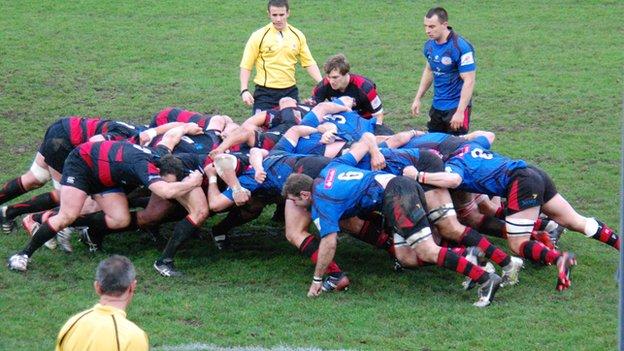 Moseley beat fellow strugglers Jersey 23-19 to move above them in the Championship table.

Penalties from Michael Le Bourgeois twice gave the islanders the lead, but tries from Charlie Hayter and Steffan Thorp helped the hosts to a 13-6 advantage at half time.

A pushover try from Ben Piennar really put Moseley in control after the break.

Jersey would not lie down and hit back when Nicky Griffiths and Nathan Hannay went over to set up a thrilling finale.

But Moseley held their nerve in stoppage time and held on for a victory which moves them up to 10th spot and sees the island side slip back to 11th.

I think a bit of complacency has crept in

Jersey lock Dave Markham was sin-binned just before the break when a maul collapsed near the try line and seconds later Thorp went over for Moseley's second.

When Piennar was bundled over the whitewash following a line-out for the third, Moseley would have known they had a great chance of grabbing an elusive first home Championship win of the campaign.

But the introduction of replacement centre Tom Cooper, back from injury, seemed to spark the visitors into life.

His run down the wing set up scrum-half Griffiths to give them hope of a fight-back.

Minutes later a charged-down kick gave skipper Hannay an easy chance to stroll over the line to claim a losing bonus-point and set up a nervy last few minutes for the hosts.

"We trained better than we played this week," said Jersey boss Ben Harvey.

"I think a bit of complacency has crept in. You can't switch off and make mistakes, giving away penalties has a knock on effect.

"I think we're a better side than Moseley but you've got to go out and do it on a Saturday afternoon."