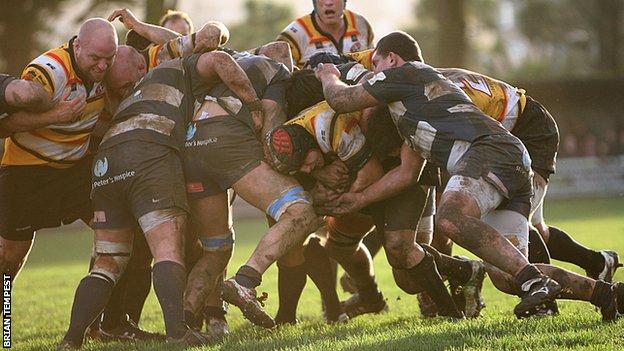 Cornish Pirates head coach Ian Davies says if his side can finish in the Championship top four this season it will be a bigger achievement than their last two visits to the play-off finals.

The Pirates moved into the Championship top four with a on New Year's Day at the Mennaye.

"We are going to challenge for the top four," Davies told BBC Radio Cornwall.

"If we achieve it I think it'll be a bigger achievement than getting to both championship finals," he added.

The Pirates have made the last two Championship play-off finals, losing to Worcester in 2011 and London Welsh last year.

But with no new stadium for the club, Pirates have trimmed down their squad as they are unable to meet the criteria to gain promotion to the Premiership.

"We have got a small squad and the boys are really working hard together," Davies said.

"Harvey's (backs coach Harvey Biljon) had four backs to train with this week which isn't ideal, especially when two of them are scrum halves.

"Our forwards have not been able to do any contact work because of the nature of our squad and we can't afford to pick up any injuries."

"When he comes back we'll have 27 players which will be a luxury," Davies said of the New Zealander.

"Hopefully he performs as he did previously but the guy hasn't played for 18 months so it's expecting a lot out of him.

"Kieron Hallett at the moment is playing really well but he's our only number 10 at the moment because Aaron Penberthy's injured.

"We're not trying to play the violin, we're just saying as it is," Davies added.