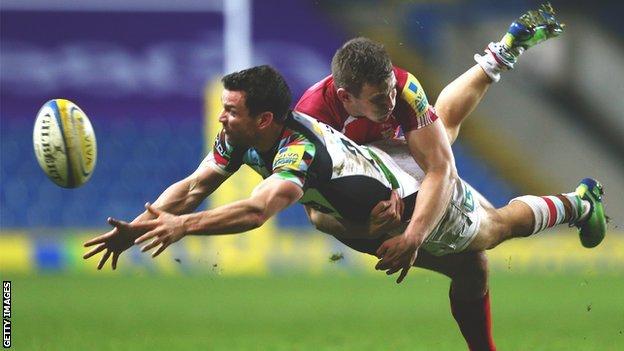 Champions Harlequins went back to the top of Premiership with a bonus-point victory over London Welsh.

But Welsh were spirited after the break and tries from Nick Scott and Ed Jackson, either side of an effort from Nick Evans, reduced the score to 26-31.

That gave the Exiles a vital losing bonus point which could yet be crucial in their battle to avoid relegation.

It means they are now 10 points ahead of bottom-placed Sale, who themselves were beaten by Saracens on Sunday.

London Irish split the pair on 16 points, five in front of Sale and the same number behind Welsh following their surprise victory at Gloucester on Saturday.

Quins themselves replace Leicester at the top of the table and hold a two-point lead over Saracens.

Harlequins led 21-6 at the break thanks to Care's early solo try and further efforts from Lowe and England captain Robshaw - both of whom took advantage of poor Welsh defending.

Evans added three conversions with Welsh responding through the boot of Ross, who sent over two penalties to reduce the deficit.

Welsh were an improved side over the break and slowly played themselves back into the game with Ross sending over two penalties in quick succession after the restart to reduce the deficit to 11 points.

But Evans edged Quins further ahead with a penalty of his own. And that sparked Welsh into life with Scott going over under the posts for a converted try that put the hosts to within touching distance of a losing bonus point.

Harlequins themselves earned their four-try bonus point after Evans finished off a beautifully worked move from the Premiership champions.

But Ed Jackson's intercepted try got Welsh back in the game with eight minutes remaining, which Ross converted as they held on for the bonus point in a frenetic finish which also featured yellow cards for Quins lock George Robson and Welsh prop James Tideswell.

London Welsh head coach Lyn Jones: "At half-time we were staring down the barrel.

"We started the second half well, we were still in there and we needed to get the first score, which we did. We had a chance to win but their class and ability shone through in the end. They are a very good side and it's a pity more sides don't play like them.

"We are showing determination and spirit and are good enough to stay in this league."

Harlequins director of rugby Conor O'Shea: "We played some magnificent running in the first 45 minutes and that's what we should be talking about - our full-back, Ollie Lindsay-Hague, dazzling people with his footwork"

He added: (On the performance of referee Llyr Apgeraint Roberts) "I'm unbelievably frustrated, you'd have to go a long way to see worse.

"Everything was wrong - it was incredible. The offside line was irrelevant, trailing runners coming back was irrelevant, backing into the maul, not releasing in the tackle - all irrelevant.

"We were 21-6 at half-time but bafflingly the penalty count was against us, how that can be?

"We have a feedback process for the referees but it's not actioned upon and it's very difficult at times."