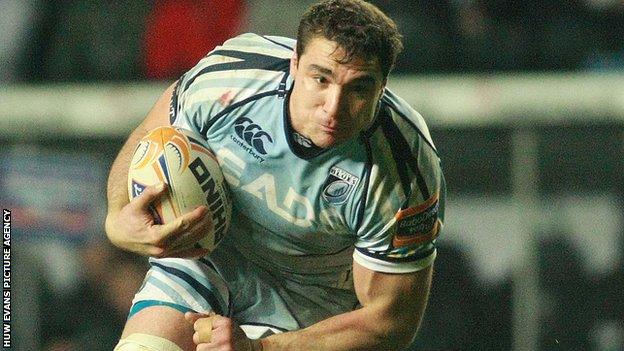 Pretorius, 27, is now eligible to play for Wales after completing the required three-year residency.

While targeting Test rugby, Pretorius insists his focus is on the Blues.

"Every player wants to play at the highest level but you've got perform well in the blue to get into the red," he said.

Pretorius joined the Blues in 2009 and was appointed the region's skipper ahead of the 2012-13 season following the departure of New Zealander Paul Tito.

"When I came over to the Blues form Gloucester three years ago I said I've got ambitions to play for Wales and that hasn't changed," Pretorius added.

"I did become eligible on 1 December, but nothing's changed for me really.

"I've got one job to do and that's for the Blues and that's what my focus is on."

The Blues, who beat Newport Gwent Dragons 12-10 at the Arms Park in the Pro12 on Boxing Day, travel to Munster on Saturday.

Wales centre Jamie Roberts is set to return for the clash at Musgrave Park after a month on the sidelines with an elbow injury.

Ahead of Wales' Six Nations opener against Ireland on 2 February and the Lions' summer tour to Australia, Roberts says he will need to be at his best for the Blues.

"It's a huge year for every player with ambitions to go on that [Lions] tour," Roberts said.

"I've said it in every interview, it starts with the club form and putting in good performances.

"Performances for the region will get you selected at international level and then who knows what will happen.

"Last year the Grand Slam was fantastic and we've got a chance to defend that this year which starts with Ireland.

"That's over a month away. The immediate focus is with the Blues."