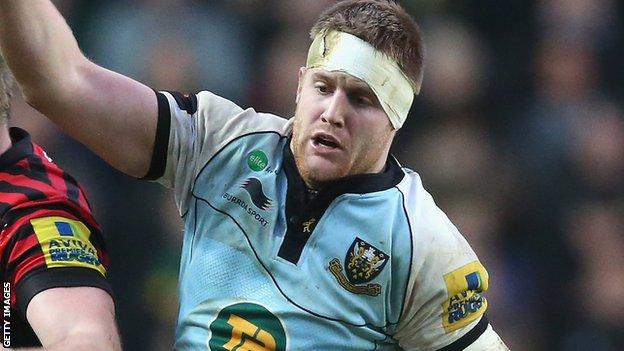 Northampton moved into the Premiership's top four with a 30-19 win over Exeter at Sandy Park.

Saints went behind to an early Gareth Steenson penalty, before Ben Foden set up Ken Pisi for an opening try.

Stephen Myler kicked three penalties and Steenson two more before Soane Tonga'uiha was forced over after 57 minutes to put Northampton 23-12 up.

Northampton's win, coupled with means the Saints leapfrog the Kingsholm club into fourth place in the Premiership table.

Exeter started the match the brighter, with Luke Arscott looking dangerous at full-back, and they took a 13th minute lead when Gareth Steenson fired over a penalty.

But Arscott handed Saints the opening try when his poor defensive kick went straight into the arms of Ben Foden.

The England full-back raced in from 45 metres out and passed to Ken Pisi who scored in the right corner, with Stephen Myler converting.

Myler added a penalty nine minutes later before hitting the post with his next three-point attempt after 33 minutes.

But he made amends soon after, as he put over a difficult looking kick from 35 metres out.

Three minutes before half-time, Northampton hooker Dylan Hartley was sin-binned after holding on to the ball at the break down 10 metres from his own try line. Steenson kicked the resulting penalty to make it 13-6 at the break.

Despite losing scrum-half Hayden Thomas to a cut above his left eye just after the restart, Exeter looked to make their man advantage count, forcing an early penalty against a seven-man Northampton scrum which Steenson put over.

Myler cancelled it out after indiscipline from the Exeter defence, but Steenson again put a penalty over to make it 16-12 to the Saints.

With 23 minutes left a long period of Northampton pressure on the Exeter try-line ended with Tonga'uiha being driven over by his pack after a catch-and-drive line-out to help open up an 11-point gap.

Exeter did not crumble and head coach Rob Baxter made a host of changes, with two of his replacements, Ignacio Mieres and Naqelevuki, linking up to send the big Fijian centre over the try-line despite the best efforts of three Saints defenders.

But Northampton had the final say as South African van Velze was pushed over by his fellow forwards in the right-hand corner with six minutes left to seal the victory and score his first ever Premiership try.