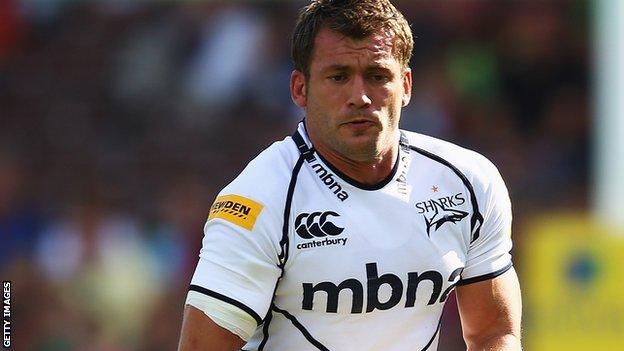 The Sale winger, 33, crossed for his 75th league try in the on Friday, equalling former team-mate Hanley's mark.

"It's nice to equal him and it would be nice to beat him. It's his claim to fame," he told BBC Radio Manchester.

Cueto joked: "If you add international tries, I would have beaten him years ago, but he won't take that."

for England, while Hanley, who was because of injury, scored once in his solitary appearance for England against Wales in 1999.

Bottom club Sale, who saw on Saturday, won for only the second time in the Premiership this season against the Warriors.

It closed the gap between themselves and second-from-bottom London Irish to a single point.

"I'd never felt like I'd felt before that game," added Cueto. "It sounds dramatic but you're playing for your job.

"If we'd lost, you'd have to be honest and say you couldn't see a way back.

"In the back of my mind, I felt that if we lost, we would get relegated. You can't explain how massive it was."