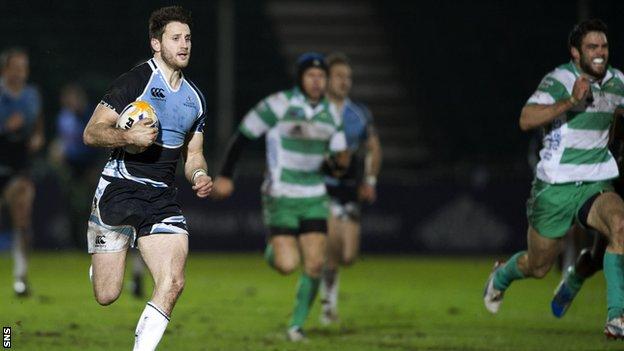 Glasgow Warriors took advantage of a very early Treviso red card to ease to a bonus-point win at Scotstoun.

Manoa Vosawai was sent off for a dangerous tip tackle on home skipper Al Kellock before DTH van der Merwe and Stuart Hogg ran in tries.

An interception from Tommy Seymour then saw the winger race 90 metres to score.

Francesco Minto claimed a score for the Italians as Glasgow lost focus after the break but Nikola Matawalu and Hogg added late tries to cheer the crowd.

Treviso arrived in Scotland on the back of three consecutive victories but were undone by Vosawai's rash spear challenge on Kellock after just five minutes.

Glasgow were already ahead thanks to a Ruaridh Jackson penalty and the stand-off added another soon after the visitors were down to 14 men.

On 25 minutes, Hogg and Seymour combined before the winger's kick was pounced on by Van Der Merwe, who notched his eighth try of the season.

And, with Treviso losing their discipline, the hosts extended their lead.

An attempted charge down by Hogg forced Luke McLean to perform an unconvincing clearance. Glasgow immediately attacked through Ryan Wilson, who charged forward before releasing Hogg - and the full-back plunged over.

Jackson continued his good form and collected the extra points from both scores.

As the first half drew to a close, Treviso made attempts to get forward but a misplaced pass metres from the line was to cost them dear.

Seymour intercepted the loose ball and raced to the opposite end of the pitch, with Jackson extending Warriors' lead to 27-0.

In a scrappy second period Treviso struck first with a try from Minto, following a chipped kick, which was converted by Kristopher Burton.

Treviso battled hard and Warriors lost their way after a number of changes in personnel.

However, the bonus point was secured when a darting run from exciting substitute Nikola Matawalu led to a try and fellow replacement Duncan Weir was able to convert.

Hogg added a late touchdown with a showboating dive and Weir was on hand to thump over the extras.