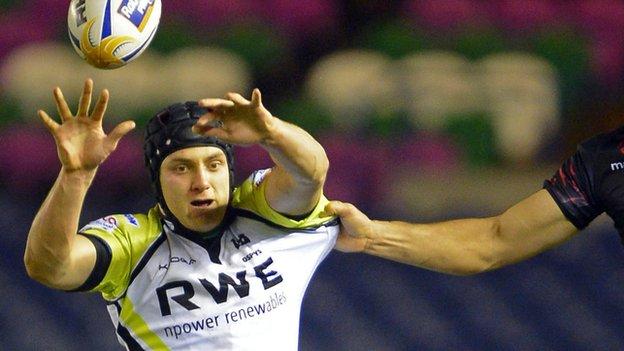 Ospreys forward James King has extended his contract with the region until the summer of 2016.

King, who favours playing in the back row but currently plays as a lock, has made 48 appearances for Ospreys since his debut in 2009.

The 22-year-old scored his second try for the region in the Boxing Day win over Scarlets.

"I'm still developing as a player and this is the place for me to do that," said former Mold RFC player King.

"The Ospreys have a great record for providing players to Wales, especially forwards."

King suffered a freak injury in a match against Cardiff Blues in January that nearly cost him his ear.

He needed emergency surgery after lacerating his ear in a collision with Alex Cuthbert, but has since made a full recovery.

After an early season knee injury, King has made nine consecutive appearances, which included his Heineken Cup debut.

A knee injury disrupted his start to the season but K

"I want to be playing week-in, week-out for the Ospreys," he added.

"Ideally I'd like to be able to force my way into play regularly in the back-row but if that's not possible, and if the team need it, I'm happy playing in the second row.

"Just to be out there in the Ospreys shirt is the most important bit."