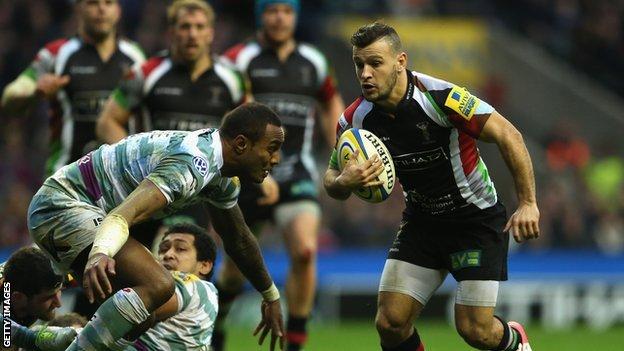 Harlequins extended their lead at the top of the Premiership with victory over struggling London Irish in front of 82,000 at Twickenham.

Sale's win over Worcester on Friday put them one point behind Irish but the Exiles failed to respond.

Danny Care's try saw Quins pull ahead and, despite Exiles' fightback, a late penalty try denied them a bonus point.

London Irish are now without a win in the Premiership in almost three months - their last coming in the 39-17 victory over Northampton on 6 October.

Quins' win leaves them on 41 points - two above second-placed Leicester - although Saracens could draw level with a bonus-point vcitroy against Saints on Sunday.

Aside from some impressive early kicking out of hand by both stand-offs, the opening half was attritional and short on thrills at a rain-drenched Twickenham.

Evans opened the scoring on six minutes after Declan Danaher broke his bind at a scrum but, when Mike Brown was penalised for not rolling away, Humphreys squared the score soon after.

Evans doubled his tally after Max Lahiff went straight down under pressure from James Johnston only for Maurice Fa'asavalu to enter the ruck from the side at the restart.

Humphreys levelled again from in front of the posts, and with little in the way of running rugby, given the desperate handling conditions, Evans missed his third shot at goal.

The Kiwi was at fault minutes later when, after a great maul from Quins inside Irish's 22, he took the ball into contact and knocked on in Sailosi Tagicakibau's tackle yards from the line.

There followed three more attempts from the tee in the run-up to the break, two of them for Humphreys, but all were off target.

Evans righted his sights during the interval and made it 9-6 early in the second half but Exiles were level again after Ollie Kohn entered a maul from the side.

The former All Black's conversion made it 16-9 with less than half an hour to play.

The Exiles brought on new signing Pat Phibbs at scrum-half and their tempo rapidly increased, along with their possession and territory.

It saw the deficit reduced to four again and, with Quins starting to make unforced errors, Irish began to smell an upset with their forwards in the ascendency.

But as Harlequins fought back the game came alive and culminated in a 19-phase move by Quins that ended with Phibbs yellow carded for knocking the ball out of Care's grasp short of the line.

The score denied Irish the vital point and Evans's conversion completed their misery.

VIEWS FROM THE DRESSING ROOMS

"I don't know what is going on at Sale. I don't wish any ill will on anyone. How they handle their affairs is completely up to them.

"If we stay united and we fight together we will get out of it and in a funny twisted way we will be better for the adversity.

"I have been in one of these scraps before. In my first year at Bath we were in a relegation scrap and then the following year we topped the league.

"My experience tells me not to look over your shoulder and not to worry about things you can't control.

"The team is living with expectations very well but London Welsh last week, London Irish and then Connacht are three games people would say, wrongly, that we should easily win.

"We know the levels we can get this team to and that's what excites me."