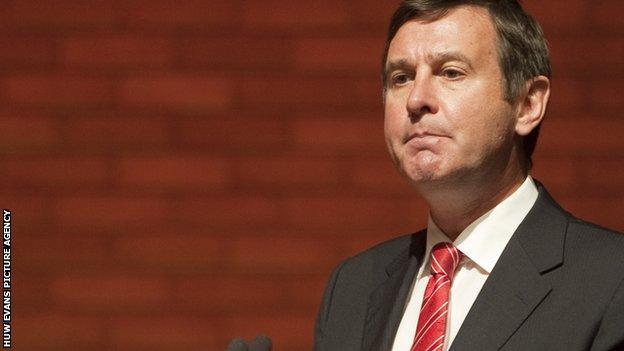 Welsh Rugby Union chief Roger Lewis has said the four Welsh regions should be centrally controlled by the Union.

Lewis claims centralising budgets, marketing, staffing and player recruitment will lead to an improvement in Europe.

He also says one of the regions should become a development side.

"The Welsh Rugby Union has to take a far greater responsibility and therefore control over professional rugby within Wales," he said.

In an interview with The Sunday Times, WRU chief executive Lewis added: "This is no criticism of individuals currently in situ at the regions, this is merely my view.

"The minimum to me must be three teams. Two is far too few and four is preferable."

Cardiff Blues, the Ospreys, Scarlets and Newport Gwent Dragons have lost a host of Welsh and non-Welsh Test stars in recent seasons, particularly to French clubs.

Lewis revealed in October that Wales' four regions turned down an offer to contract their Welsh international players centrally.

A new professional body has been set up by the Welsh Rugby Union and the four regions to run the game in Wales.

The Professional Regional Game Board (PRGB) has been created to oversee professional rugby in the wake of a report into the regional game by accountants PricewaterhouseCoopers.

Former Cardiff RFC chief executive and Wales fly-half Gareth Davies agrees change is needed but says downgrading a region will be a difficult step to take.

"I think something has to be done because obviously the state of the game is causing concern," Davies said.

"The regions are struggling and even in recent times the national team has been struggling.

"People are expecting and wanting something to happen. There has to be some sort of central control I think.

"The coming together of the Union and the regions will ensure that we keep most of our best players. I suspect we can't keep all of them.

"I think that it's important that this is done in conjunction with the regions as they currently exist."