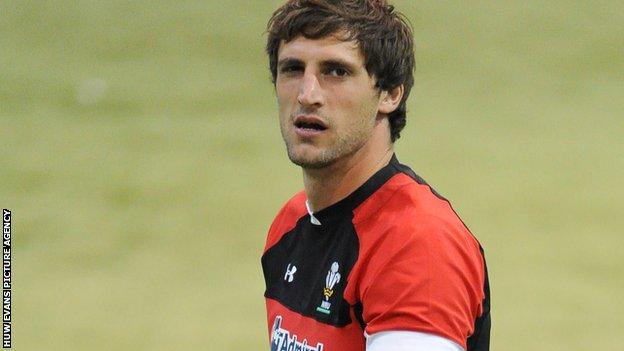 Ex-international Dafydd Jones says the loss of Luke Charteris is a further blow to Wales ahead of the Six Nations.

Lock Charteris will miss the Six Nations after he ruptured medial knee ligaments during Perpignan's clash against Montpellier.

"We have got options but it isn't ideal we've lost three of our first choices and that's a big blow," he said.

"Luke Charteris is a big man. He's got so much to offer and is going to be a big loss.

"They're [the Welsh selectors] going to be busy now over the Christmas period looking at who is in form and I wouldn't be surprised if someone had another chance."

Injuries hampered Wales during the recent autumn series and prop Adam Jones and flanker Dan Lydiate were ruled out of games against Argentina, Samoa, New Zealand and Australia.

Jones has recently started his comeback with the Ospreys but Cardiff Blues backs Jamie Roberts and Leigh Halfpenny are both currently out.

Ex-Scarlets back-row Dafydd Jones says Wales will have a point to prove following a disappointing autumn series which saw them lose all four Test matches.

"We've got a lot to prove," Jones added. "Obviously the Welsh regions aren't at their best at the moment and we need to be working hard in the run up to the Six Nations.

"We've got three away games and we've got to be consistent throughout but we need to start the tournament well by winning."