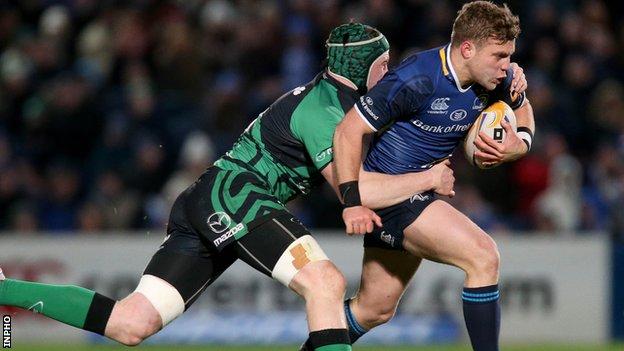 Tries from Ian Madigan and Jack McGrath helped Leinster to a comfortable Pro12 derby victory over Connacht at the RDS.

Connacht's Dan Parks missed a penalty before Madigan opened the scoring on 33 minutes with a converted try to leave Leinster 7-0 ahead at the break,

The fly-half stretched the host's advantage with a penalty before adding the extras after replacement McGrath went over for a 73rd-minute try.

The visitors had a strong wind at their backs in the opening half, but failed to register any score to reflect their dominance of territory.

Eric Elwood's side were unable to build on a fine early break from winger Danie Poolman as Leinster regrouped in a physical first 10 minutes.

Leinster's forwards grew into the contest, carrying well at close quarters, but the Michael Swift-inspired Connacht were finding holes in the hosts' defence.

Poolman just miscued a grubber kick as he latched onto a cross-field delivery from Dan Parks and Leinster snatched a crucial turnover after a dangerous catch and run from Robbie Henshaw.

Having gained ground in a scrum, Parks was presented with his first shot at the posts but pulled the 14th-minute penalty to the left and wide.

Andrew Goodman and Dominic Ryan both barged defenders as the men in blue gained further momentum and a quick tap penalty from Madigan saw him break out of a tackle to score from close range.

The fly-half added a tricky conversion from the right and boosted by the seven-pointer, Leinster continually got over the gain-line as half-time approached.

There was no sign of the midfield traffic giving way until Leinster sparked a series of pick and goes with 50 minutes on the clock.

Dominic Ryan, McFadden and stand-in captain Isaac Boss were heavily involved, before Devin Toner was held up over the try-line. Connacht held out though, winning a turnover from the resulting scrum.

Madigan did increase Leinster's lead with a well-struck penalty towards the end of the third quarter.

Connacht showed flashes of clever attacking play, most notably when scrum-half Kieran Marmion broke from a ruck near halfway and chipped towards the corner.

However, solid Leinster defence and cheap turnovers kept Connacht away from the whitewash and without a score to show for their efforts.

Having turned down a kickable penalty, Brett Wilkinson knocked on a pass from the ensuing lineout. Marshall then blocked an attempted kick from Parks and Leinster broke downfield.

The hosts pulled Connacht through phases of strength-sapping defence in the closing stages and the pressure told when McGrath, supported by Toner, thundered over to the right of the posts.

Leinster hunted for a third try in the dying minute with teenage replacement Adam Byrne threatening on the right wing, but they had already done enough to get their play-off push back on track.