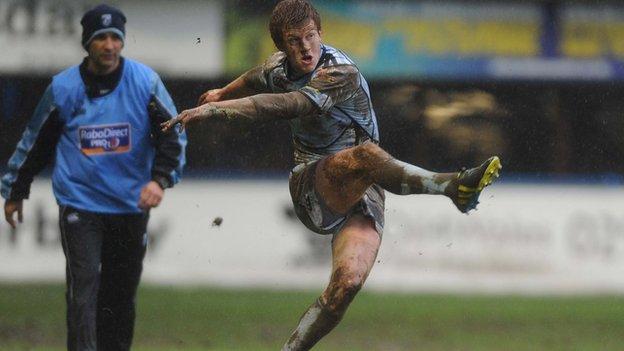 Fly-half Rhys Patchell kicked the Cardiff Blues to victory but they had to come from behind to beat the Newport Gwent Dragons in the east Wales derby in the Pro12.

The 19-year-old, who has played only seven regional games, slotted over four penalties for the home side.

Centre Andy Tuilagi scored a converted second half try for the visitors.

And they went in front through a Lewis Robling penalty before Patchell's fourth kick clinched a Blues victory.

It was a game played in terrible conditions, with the quagmire of a pitch at the Arms Park dictating the conservative approach of both teams.

For the Blues, who lost 9-6 to the Scarlets four days earlier at the same venue, it is a vital victory in their battle with the Dragons for Heineken Cup qualification, taking them 12 points clear of their Welsh rivals in the Pro12 table.

Wales number eight Toby Faletau returned to action for the Dragons after starting in all four of Wales' autumn Tests and produced a man of the match display in a losing cause.

The Blues defence kept the home side in the contest initially and they tackled themselves to a standstill against a Dragons side which dominated territory and possession in an error-strewn first 40 minutes.

Visiting fly-half Dan Evans missed an early penalty attempt before his opposite number, Patchell, landed three penalties to give the Blues a 9-0 lead against the run of play.

Evans missed a second penalty attempt in front of the posts but the Dragons finally made the breakthrough after the break following a sustained period of pressure on the home side's line, powerhouse Samoa centre Tuilagi running over diminutive Blues wing Harry Robinson to score. Scrum-half Wayne Evans added the conversion.

Blues fly-half Patchell then conceded a penalty when he failed to release the ball in the tackle and replacement Dragons fly-half Lewis Robling gave the visitors a 10-9 lead midway through the second half.

But Patchell made amends when he slotted over his fourth penalty to restore the Blues lead and when Robling pushed a drop-goal attempt just past the post in the 76th minute, the Blues were safe.