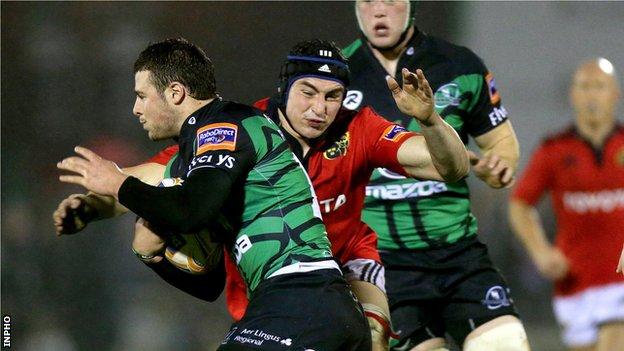 Those points included a penalty try as the Munster scrum took full advantage.

Ian Keatley brought his haul up to 11 points after the break and while two Parks kicks cut the margin to four, Munster held on to take the victory.

Connacht will look back on two crucial missed chances as Fetu'u Vainikolo was denied by a last-ditch Keatley tackle in the first half and lock George Naoupu failed to ground the ball 10 minutes from time as he skidded over the Munster line.

Munster were without all their current frontline Ireland players as the match started off with rain sheeting down at the Sportsground.

Park nudged Connacht ahead in the 11th minute after Donncha O'Callaghan had been penalised but Keatley levelled six minutes later after a period of Munster pressure. 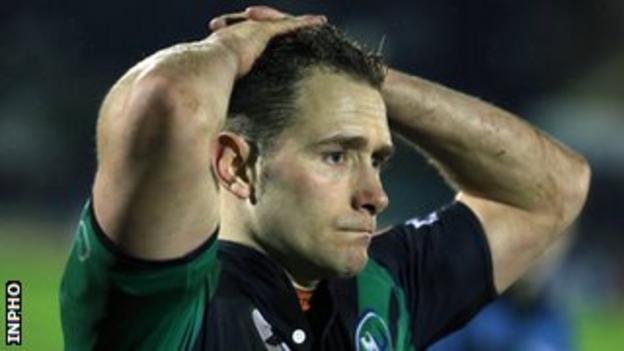 Former Scotland fly-half Parks restored Connacht's lead on 24 minutes and Keatley had to produce a sensational tackle to prevent Vainikolo from scoring a breakaway try for the home side after Luke O'Dea's fumble in midfield.

The key period of the match came in the five minutes before half-time after Connacht hooker Harris-Wright had been sin-binned by referee Dudley Phillips after one ruck transgression too many.

From the resultant scrum in the Connacht 22, Munster's shove led to a penalty try being awarded and Keatley's conversion put the visitors 10-6 up, although home coach Eric Elwood strongly questioned the referee's decision after the game.

Connacht's scrum was penalised again after the restart and a thumping Keatley penalty suddenly had Munster in comparative control at 13-6 up at the interval.

More Connacht indiscipline was punished by Keatley at the start of the second half to leave 10 points between the sides.

However, the home side responded well and pressure yielded a third Parks penalty on 45 minutes and a further drop goal by the fly-half on 53 cut the margin to four points.

The game appeared to be there for the taking for Connacht on 63 minutes when Munster centre James Downey was sin-binned for a high tackle on the impressive Mike McCarthy.

But in contrast to Munster in the first half, Connacht were unable to make their 10 minutes of personnel advantage count.

Naoupu looked to have scored a try on 70 minutes as he nipped in ahead of Peter Stringer to skid over the line but the TMO ruled, correctly it appeared, that he hadn't grounded.

Connacht produced further late pressure but Munster held firm to take a victory which moves them up to third in the Pro12 table.