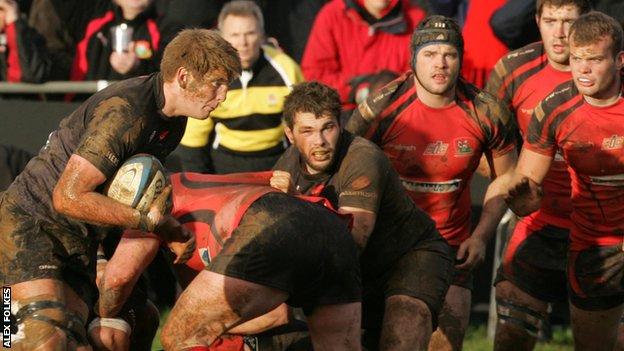 Launceston are ready for what boss Cliff Rainford calls a "massive" derby with Cornish rivals Redruth.

Redruth won the first meeting this season but have never won at Polson Bridge in the league.

"It doesn't come along that often, but it is a massive game," Rainford told BBC Radio Cornwall.

There has not been an away win since the Cornish All Blacks edged past Redruth 9-7 at the Rec in January 2010.

Redruth are third in National Two South, 20 points ahead of their rivals, who are seventh, but Launceston are in form having lost only once in six games.

"We'll focus on our game first and foremost," added Rainford.

"If you go into games altering too much for the opposition you stand a chance of coming undone.

"We're mindful of the good players they've got, they're a good outfit and they're riding high in the league.

"But if we play our game on the day we're very difficult to beat.

"It'll be a big day and a win will send us into Christmas with good cheer."

Meanwhile Evans says the Reds believe they have a great opportunity to break their league duck at Polson Bridge.

"If there's a time to win I think this is the weekend to win it." he said.

"We've got a good momentum coming into it, but derby games are different.

"We won't treat it much different but on the day, with the atmosphere and lots of people watching, it does change.

"We did a job on them at our place and I think they'll be remembering that.

"If we play to our game-plan and the boys do what they've been told in training and keep their heads I'm quietly confident that we'll come away with a nice win."