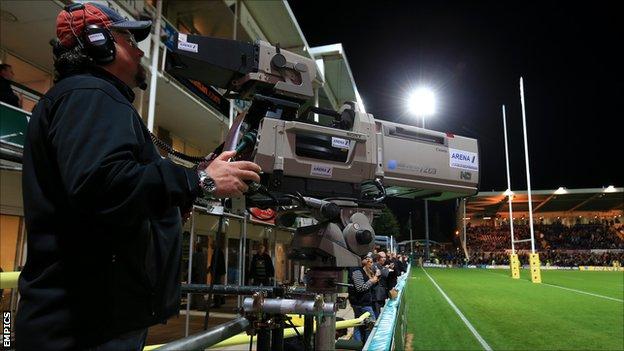 The Rugby Football Union is trialling a "ref-cam" during the televised Championship game between Newcastle Falcons and London Scottish on Sunday.

Match official Matt Carley will have a camera attached to his shirt to show close-ups of on-the-field action.

"It'll be fun and games for the viewers but it won't disrupt us too much.

"You'll have to tell the boys in the front row to watch themselves."

"It's an interesting one. If I was a viewer would I want to see and hear it? It might be nice to get an insight into what's going on.

"As a player it's our job to make sure it doesn't distract us. We're all aware it's going on.

"With all technology it has to move on and evolve and if that's how they think it's going to be let's give it a go."

"It will also provide us with an additional tool which can be utilised within the development of referees."

Referees at televised matches are already connected to microphones which keep the dialogue between players and officials open to all.

Likewise, in both union and league codes of rugby, cameras are located in dressing rooms to give viewers an insight behind the scenes, but this is the closest the sport has come to bringing an insight at pitch level.

"I don't know whether I like it. They're bringing all these things in to improve the viewers' experience. It's going to be something different," Newcastle Falcons director of rugby Dean Richards told BBC Newcastle.

"It's something we have to be mindful of. It's a high-pressure game with a few thousand people here.

"When you get so close to the action it's a different experience to at a distance. I'm nervous about it."