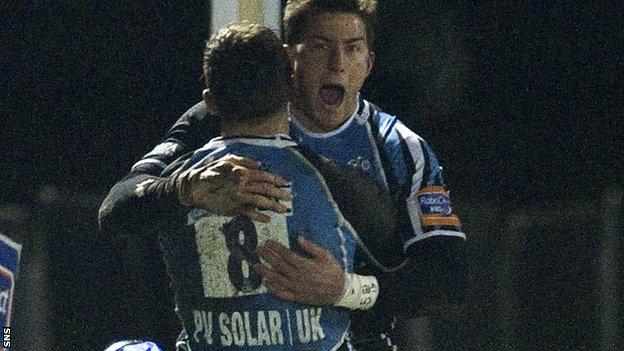 Glasgow Warriors take a nine-point lead into the second leg of the 1872 Cup after securing a deserved Pro12 victory over inter-city rivals Edinburgh.

Tries from DTH van der Merwe and Rob Harley were reward for intense home pressure in the first half.

Glasgow came up short in their late attempt to secure a bonus point in what was, despite all the obvious endeavour, a scrappy, error-strewn match that personified the two sides' seasons so far.

And Edinburgh will hope to take advantage of the home team's decision to pass up penalty opportunities as they look to overturn the tie on aggregate in the second leg at Murrayfield next Saturday.

Edinburgh, for whom Scotland centre Nick De Luca failed a late fitness test, made another late change, with Wales prop John Yapp starting in place of Scotland veteran Allan Jacobsen, who had been expected to return from injury.

The visitors had early pressure, but Glasgow took a rather fortunate lead with their first foray into the Edinburgh half after six minutes.

Ruaridh Jackson fumbled and looked to have knocked the ball on before re-gathering and setting up Peter Murchie for a break through the Edinburgh line.

The marauding full-back set up Van der Merwe for the touchdown in the corner.

Horne continued where he left off last week by missing the conversion, but it was not long before Edinburgh suffered a further blow, with former Scotland captain Ross Ford leaving the field after 10 minutes when the hooker picked up a shoulder injury.

Glasgow were now launching wave upon wave of attacks on the Edinburgh line and, when Van der Merwe was held up five metres short of the line, Niko Matawalu was on hand behind the ruck to set up Harley to score in the corner.

Horne was again well off target with the kick from out wide, but the Warriors continued to lay siege.

A third try in a row came on Glasgow's right as Van der Merwe looked offside before latching on to Matawalu's chip over the scrum and the winger slid over, being awarded the score despite suspicions again of a knock on.

It was also third time lucky for Horne as he slotted over the conversion to put Glasgow 17-0 ahead after only 24 minutes.

Edinburgh finally got on the scoreboard after half an hour through a simple penalty by Laidlaw, the Scotland international back returning to his former role at scrum-half after some time playing at 10.

Encouraged by that, the visitors followed up with a spell of pressure of their own but lacked the composure to make it count.

Edinburgh again started the better and, unlike the first half and when Glasgow were caught offside, they made their pressure tell when Laidlaw launched a 35-metre kick between the posts.

It was game on when, again despite suggestions of offside, Matt Scott made a fine break before setting up Francis to force his way over the line.

After Laidlaw was just wide with the conversion, Glasgow steadied themselves with a spell of pressure of their own that resulted in a successful penalty from replacement Weir.

Laidlaw and Weir exchanged long-range penalties before Warriors failed in that late attempt for a bonus-point try.