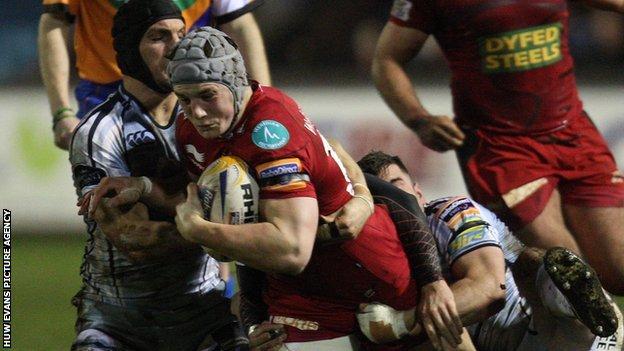 The Scarlets battled to victory in their Pro12 Welsh derby with Cardiff to stay second in the table.

On a night when style was at a premium and sheer effort ruled the contest, visiting fly-half Aled Thomas's three penalties to opposite number Rhys Patchell's brace proved the difference.

Thomas proved equal to the kicking task and Patchell was no less effective with his two shots.

But the visitors registered a seventh successive win over the Blues.

Simon Easterby's Scarlets had an early advantage at the scrums and maintained it throughout the opening period.

That gave the visitors the platform from which fly-half Thomas kicked his three penalties, while the Blues' response came from the boot of home 10 Patchell.

Wales wing George North also made his mark with some powerful running and intelligent play.

But overall the opening period was disappointing as both sides failed to make the most of the chances that came their way.

A lack of poise and vision at crucial moments was to blame as defences ruled in sticky conditions in the Welsh capital.

And while the Scarlets scrum power was evident, the Blues' ability to overcome their disadvantage at that phase ensured they remained a threat.

The contrasting expertise of rival flankers Sam Warburton and Josh Navidi of the Blues and the visitors' Josh Turnbull and Aaron Shingler was also a significant factor.

Warburton and Navidi are both natural open-sides and more comfortable when the ball is on the move, while the more physically imposing Shingler and Turnbull were able to exert greater influence at close quarters.

The opposing back-rows largely cancelled each other out via their differing areas of influence.

Patchell added a second penalty after 58 minutes to reward his side's efforts.

However, while rival pivots Patchell and Thomas' goal-kicking skills kept the contest close, ball-handling and decision-making were a disappointment.

Neither side was able to string together a concerted attack by the time the final quarter arrived.

North threatened to end the lack of telling penetration with a burst deep into the heart of the home defence.

But the Scarlets were penalised at the ruck after North was halted five metres out.

Replacement Scarlets' scrum-half Gareth Davies then launched a counter-attack that offered hope of the night's first-try.

Fly-half Thomas broke through as the pressure told, but his pass that freed wing Liam Williams was judged to be forward.

But another forward pass put paid to their chance.