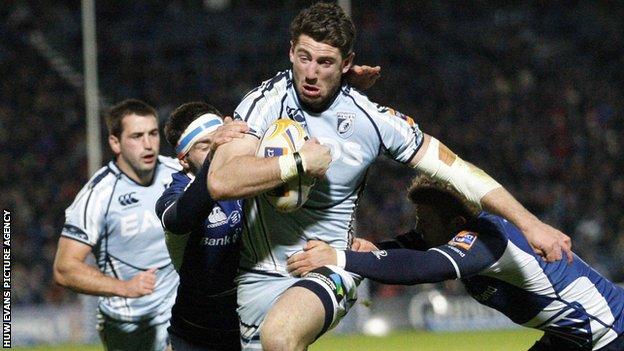 Cardiff Blues are in negotiations to extend Wales wing's Alex Cuthbert's contract at the Arms Park beyond the end of the 2012-13 season.

Director of rugby Phil Davies confirmed the Welsh region hope to sign the 22-year-old on a new three-year-deal.

Cuthbert signed a one-year-contract extension with the Blues last season.

"Myself, Richard Holland [(Cardiff Blues chief executive), Alex and his advisors have been working on trying to sort things out," said Davies.

Hopefully, things will come to fruition pretty soon but I am not sure when. It will be sooner rather than later now.

The 6ft 6in Wales wing, who made his Test debut as a replacement against Australia in 2011, has been linked with a big-money move to Racing Metro or Toulon in France.

But the 13-times capped Welsh international is expected to buck the player-drain trend out of Wales by staying with the Blues.

"We want to try and keep all our best players," said Davies

"Myself, Richard Holland, Alex and his advisors have been working on trying to sort things out.

"Hopefully, things will come to fruition pretty soon but I am not sure when. It will be sooner rather than later now."

The 22-year-old's decision to stay in Wales would be a major coup for the Blues, following Lions centre Jamie Roberts' decision to leave the Arms Park next summer.

Roberts has confirmed he will leave Wales at the end of the season and has been linked with a move to Paris club Racing Metro.

Davies has underlined the importance of Cuthbert to his future plans for the Cardiff Blues.

"What I am trying to do with the whole squad is to put a group of players together over a three-year period, so we can build and get some success here," said Davies.

"Alex and a number of other players are important to that.

"There has been a massive turnaround in personnel and the rebuilding is going to take more than one recruitment season, but the idea is to put a nucleus together and build and try to move forward."