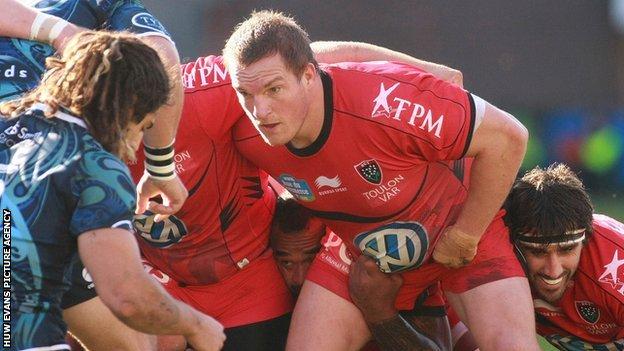 The Wales and British and Irish Lions prop has largely been second-choice to England's Andrew Sheridan for the Top 14 leaders this season.

That has led to speculation over the 32-year-old's future.

But Whitford said: "There's no reason why he'd want to leave us at the end of the season."

Jenkins was first-choice Wales loose-head for the opening autumn defeat by Argentina.

But after being regularly overlooked for a Toulon starting place, Jenkins also saw the Wales number one jersey worn by Bath's Paul James for the autumn defeats by Samoa and New Zealand.

He returned when James was unavailable for the 1 December defeat by Australia and played no part for Toulon when they won 17-6 in the Heineken Cup at Sale the following weekend.

However, he started in Toulon's 62-0 home victory over Sale on 16 December and Whitford says that like ex-New Zealand All Black tight-head prop Carl Hayman, Jenkins may simply be taking time to settle into a new regime.

"He played against Sale at the weekend and had a good game as well so as far as we're aware… there's no reason why he'd want to leave us at the end of the season.

"He'd obviously like to play a bit more, but I think it takes a bit of time to adapt to playing in France sometimes.

"It's not just him. Two years ago Carl Hayman, when he first arrived, took a few months to adapt to playing in a French club in the French championship, hence why Gethin is taking a bit of time as well, perhaps.

"And with a bit of luck he'll keep going and keep playing well and his chance will come to play even more games, as Carl Hayman has done."