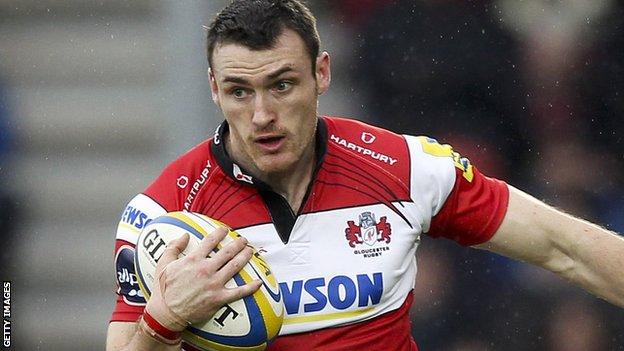 Gloucester wing Shane Monahan insisted he was happy just to be involved in the first-team after running in four tries against London Irish.

The 25-year-old finished superbly to lead the side to to a 47-3 victory.

"I'm just absolutely delighted to play because I've been in the situation before where you just train," he told BBC Radio Gloucestershire.

"I fought very hard to get to this level and getting the opportunity now to do it is a dream come true for me."

Monaghan joined the club in the summer from Championship side Rotherham, where he scored 11 tries last season.

The former Ireland Under-20s international initially moved to England after struggling to hold down a first-team place at both Leinster and Connacht.

Although scoring four tries in a game is rare in rugby union, Monaghan has achieved the feat before for the Cherry & Whites.

"As it happens, this season the first 'A' game I ever played for Gloucester, I scored four tries against Worcester so that was a special moment for me," he added.

"To get to do it twice in a season is brilliant and I might get it a third time, we'll see what happens.

"These games are very important for the Premiership as well because you want to have that momentum."