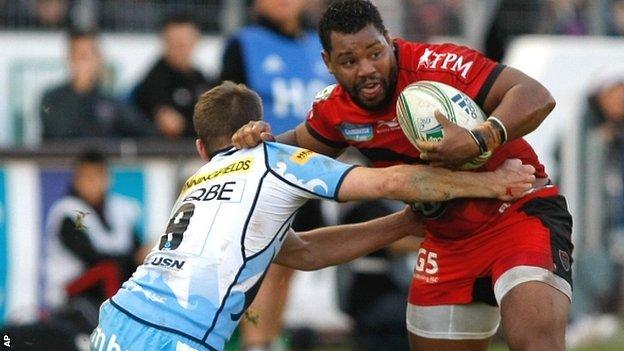 Toulon thrashed Sale to maintain their 100% record in the group stage of the Heineken Cup.

The French side were below par in last weekend's 17-6 victory at Sale, but were far sharper at the Stade Felix Mayol as they ran in nine tries.

Having won their opening three matches, Toulon rested a host of key players for the reverse fixture against Sale.

Englishmen Andrew Sheridan, Jonny Wilkinson and Simon Shaw were among those to come off the bench.

Michalak kicked the first points of the day after five minutes but Sale then kept the French side at bay until the half-hour mark.

However, a flurry of scoring before the break saw Jean-Charles Orioli and Michalak cross for tries, both converted, as Toulon took command.

Sale's Fraser McKenzie and Toulon substitute Shaw were shown yellow cards in a second half that became something of a rout.

England internationals Steffon and Delon Armitage were among the try-scorers, with Wilkinson replacing Michalak on 67 minutes and making one conversion.

"The team is disappointed, as well as individuals with their own performances.

"I've been looking at this group of players ahead of the Christmas period and I certainly know a lot more about some individuals after that performance.

"Some of the characters have been revealed and I don't have a lot of choice in some positions but we don't have any regrets - we got what we deserved. Toulon were exceptional."