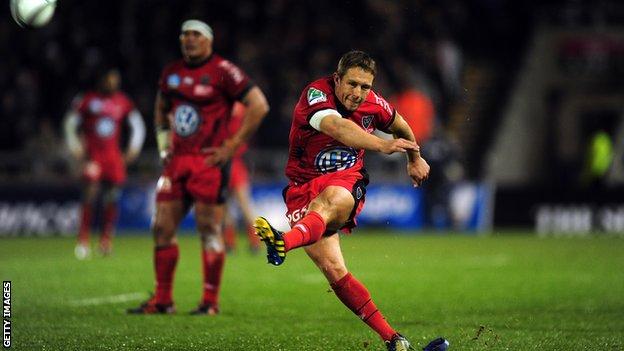 British and Irish Lions coach Warren Gatland says Jonny Wilkinson is in the frame for the Australia tour, but Toulon's success may hamper his hopes.

Wilkinson's side are five points clear at the top of the French Top 14 and on course for the play-offs.

The final takes place on 1 June, the same day as the first match of the Lions' tour in Hong Kong.

"If we take the France-based players, our preferred option is that they are on the plane with us," said Gatland.

"We know what a quality player Jonny is. He is out of international rugby but he is playing in a side that is winning, and he is definitely one we are keeping an eye on.

"The most difficult thing is we will be getting the squad together for almost the first time on the plane.

"But if you look at guys at Toulon for example, they could be playing in a final the same day as our first game in Hong Kong. So it is going to be difficult to integrate them and get them to be a part of the tour.

"It is not something we need to commit to now, and we will look at the strength-in-depth in certain positions, and injuries, but the idea is to have everyone on the plane together."

Wilkinson toured with the Lions in 2001 to Australia and 2005 to New Zealand.

Ireland's Jonny Sexton is favourite for the fly-half position in the Lions Test side after the autumn Tests.

But with Wales fly-half Rhys Priestland ruled out for the rest of the season with an Achilles injury, and Toby Flood, Owen Farrell and Freddie Burns battling for the England number 10 jersey, there are no clear rivals at this stage, with Wilkinson also in the frame.

There is real depth in certain positions; we have a lot of choice

Gatland conceded that despite the quality and depth available to him in the second row, back row, centres and back three, he is still looking for candidates at scrum-half, fly-half, prop and hooker to stake claims.

"Those are probably the four positions where there are definitely opportunities for players to cement themselves," he told BBC Sport.

"When you look at the other positions, there are a huge amount of candidates and depth in those areas, and there are going to be some very disappointed players when the final squad is announced."

Gatland and his assistant coaches Graham Rowntree, Andy Farrell and Rob Howley sat down for a three-hour discussion on Tuesday evening about what the squad would look like if they were picking it now, discounting those players currently out injured.

"When we finished, we were very excited about what that squad and team would look like, and the potential of that team. There is real depth in certain positions; we have got a lot of choice," added the head coach.

"At the moment we have got a group of names down on a list that we are going to track, as well as the injured players. Then players are going to put their hands up in the Six Nations so we feel we are well placed from a selection point of view."