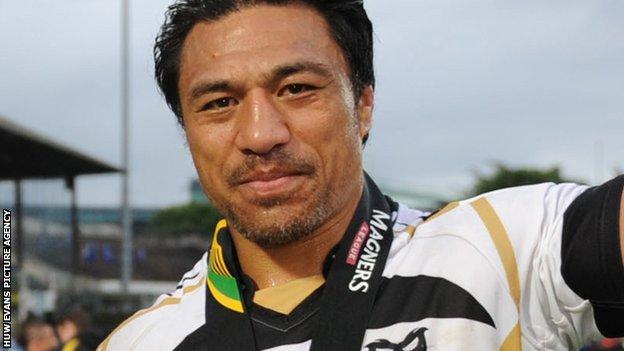 Former New Zealand back-row Filo Tiatia says his former side Ospreys are still not out of Heineken Cup contention.

The Welsh region are third in Pool 2 with five points from three games.

But Ospreys have home advantage this Saturday against leaders Toulouse and will also play Leicester at the Liberty Stadium on 12 January.

"They love the underdog tag, they've always had it... it's backs against the wall and I know that the Ospreys will come out fighting," Tiatia said.

"I heard and read reports when they went away at Toulouse that they played really well, were constructive in attack and defended really well in parts of the game.

"They've got a lot of young players there and they've still got a couple of international boys in their ranks... there's a wealth of experience there, but also with youth and a lot of exuberance.

"The big difference this year with the Ospreys is they don't have the big signings they did in the past; Toulouse are one of the giants in European rugby.

"If each individual in that [squad of] 23 can nail down their job with high intensity and really put Toulouse under pressure there's always a chance."

But in their next game, Ospreys opened up a 10-point lead at Welford Road before succumbing to a Leicester fight-back that also denied the Welsh even a losing bonus point.

Very few teams manage to come away with any rewards from Toulouse, so a loss at the French powerhouses was not unexpected.

With the most difficult fixtures behind them and the succour of the Liberty Stadium for the key clashes with Toulouse and the Tigers, Ospreys are still having to play catch-up against their rivals.

"Obviously they wanted a better start to their campaign, but all they can really focus on is playing this game against Toulouse and hope to get a performance they know they are capable of," Tiatia added.

"They will probably need maximum points to kick on, but knowing [head coach] Steve Tandy and the players they will just want to get the 'W' [win] and really get the little things right.

"It is a big ask but it's also achievable; if they really focus on what they can control... they'll be able to apply pressure and then hopefully get the points and the rewards I'm sure they will be striving for."

Tiatia was with Ospreys for five years as first a player and then a coach, before departing to become forwards coach at Toyota Verblitz - the Japanese side he left to play for Ospreys in May 2006.

He has since been promoted to head coach at the Top League side and says the Japanese are already looking ahead to June when Wales arrive for a two-Test tour.

"I know that the public here and the fans will be looking forward to the Welsh coming back to these shores," Tiatia said.

Wales last toured there in 2001, winning both Tests in high-scoring games under then coach Lynn Howells, but this time it will be Robin McBryde who holds the reins with Warren Gatland away coaching the British and Irish Lions in Australia.

"I think it's an exciting coaching staff," Tiatia said. "I know Muckers [McBryde] really well and Mark Jones' inclusion is quite exciting.

"With the results that the Scarlets have had over the last season or two it sounds like he's going pretty well in his young coaching time.

"There's a lot of room for development but with Muckers being head coach he can try a couple of different things, experiment with different combinations while he's in Japan.

"The grounds here are dry and fast, and if they want to play a quality expansive game - which the Welsh love to - it will suit them. It's a great opportunity."