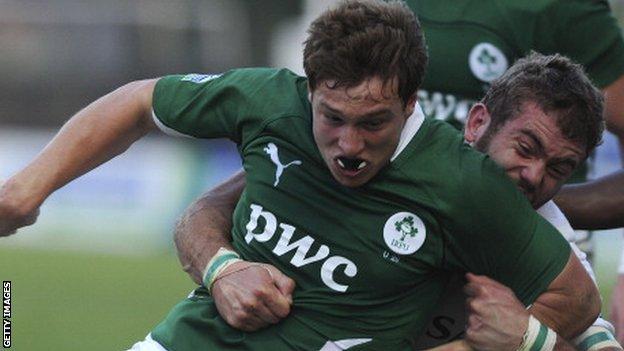 Leinster A ran in seven tries on their way to a comfortable 44-13 win over Jersey in the British and Irish Cup.

Adam Byrne scored the opener in the corner for the hosts, who led 20-6 at the break after Brendan Macken's touchdown and a penalty try.

Leo Auva'a grabbed a fourth just after half-time to seal a bonus-point.

The result put the Irish province back on top of Pool Five on points difference from Pontypridd, while Jersey stay third with Leeds Carnegie bottom.

Byrne's first try set the tone for the afternoon with the visitors left stretched out wide, and it was a similar story when centre Macken evaded numerous tackles for Leinster's second.

Jersey fly-half Barry Davies, a former Welsh international, was sin-binned just before half-time for his part in conceding the penalty-try as Macken again raced towards the line.

With the islanders still down to 14 men, Leo Auva'a was able to breach their defence just two minutes after the restart to clinch the bonus-point.

When Davies returned to the action, Jersey were immediately reduced to 14 men again when James Gethings was shown yellow.

From then on it was an uphill task, and when Ryan, Byrne and Gilsenan went over it looked like Jersey might concede half a century of points for the second time this season.

But the Championship side finished strongly and replacement O'Brien was able to sneak round the side of a sloppy Leinster scrum to score the consolation.