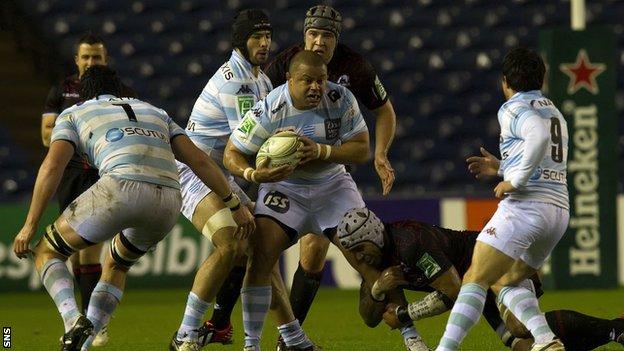 Edinburgh are still without a point in the Heineken Cup following defeat to Racing Metro at Murrayfield.

Last season's semi-finalists have yet to score a try in four outings and rarely threatened the French visitors on a cold, wet evening.

Edinburgh defended stoutly but could only profit from one of the six penalties that came their way.

These sides served up a 48-47 cracker in the pool stage of last year's tournament, with Edinburgh running in six tries to five to come out on top.

However, there was to be no repeat of that thrilling encounter, with the home side guilty of poor handling and a lack of guile, while the French visitors were content to grind out the victory.

Out of contention to reach the knockout phase before kick-off, a much-changed Edinburgh welcomed back Scotland centre Ben Cairns following a 16-month injury lay-off, while Ben Atiga and Netani Talei made their first appearances since October.

Piers Francis was given his first start at stand-off after making his debut off the bench in Paris last weekend but the recent arrival from New Zealand side Chiefs had a night to forget in front of the posts, missing four of the five penalties he took.

Barkley knocked over a straightforward penalty and the visitors doubled their lead after seven minutes with Argentina full-back Germain demonstrating great power and accuracy.

Francis ballooned two wayward penalty attempts before he split the posts from 30 metres after 28 minutes.

Edinburgh hooker Ross Ford made a lumbering dash for the line when his line-out throw was flipped back to him and scrum-half Chris Leck was taken out 10 metres out by an offside Jaques Cronje.

Referee Dudley Phillips gave the penalty but kept his cards in his pocket and Francis tugged his kick narrowly wide.

The second-half opened with Germain's looping long-ranger clipping the outside of a post and again it was Fife who was quickest to react and thwart the danger.

Francis was wide and short with an effort from distance before Talei was sin-binned for a ludicrously late challenge on Barkley.

The numbers were evened up soon after when prop Eddy Ben Arous was shown a yellow card for deliberate interference from an offside position during a rare Edinburgh attack.

Greig Tonks took over the kicking duties from Francis but could not fare any better from 40 metres.

Germain then increased the visitors' lead with two confident penalties as Edinburgh's self-belief drained away with the lashing rain.

The game ended with Edinburgh penalised for a squint feed at a scrum and Racing Metro pushed for a try under the posts in stoppage time.

However, the move lacked conviction and ended with a Richie Rees interception, while the hosts soon squandered possession with a wild pass, rather summing up their night.