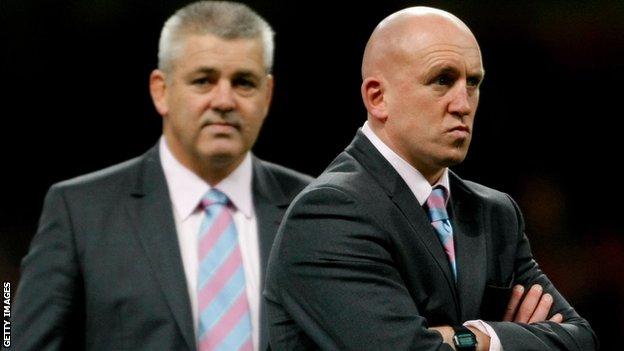 England's Andy Farrell will be the Lions' defence coach in Australia in 2013 rather than the Wales assistant.

"But you look at someone like Alex Ferguson. He has always been prepared to keep things fresh and make changes."

Wales' Rob Howley and England's Graham Rowntree join Farrell in the Lions coaching team down under.

Gatland added: "Sometimes they are difficult decisions to make and that's why we are put in these positions - to be prepared, if we think it's the right decision, to sometimes make it."

Edwards has been at Gatland's side with Wales since 2008, winning two Six Nations Grand Slams and guiding the team to the 2011 Rugby World Cup semi-final.

The former Great Britain rugby league international was an assistant coach to Sir Ian McGeechan on the last Lions tour in 2009, working alongside Gatland, Howley and Rowntree.

But Gatland has opted for the 37-year-old Farrell, who has been part of England's coaching team for nine Test matches.

"It was an agonising decision - very, very tough to make," said Gatland. "I've worked with Shaun a long time and I regard him as a world-class coach.

"It was a tough, tough discussion in terms of saying: 'Look, I've made the decision to take Andy Farrell'.

"It wasn't easy but he appreciated the call and I know how disappointed he was.

"Sometimes you have got to make hard calls or hard decisions even if it is not always the most popular decision or you are sometimes letting people down."

While the Lions are in Australia, searching for a first series win since 1997, Edwards will be on Wales duty under caretaker coach Robin McBryde for a two-Test tour in Japan.

Gatland will resume control after ending his Lions duty, and will work alongside Edwards again to prepare Wales for the 2015 World Cup.

The New Zealander hopes his decision to omit Edwards from the Lions tour will not affect their working relationship.

"It wasn't the easiest thing to do but he's been involved in professional sport for a lot longer than me in terms of his rugby league background as well," added Gatland.

"He is incredibly disappointed but can understand, at the end of the day, I have gone through the process and made the call."