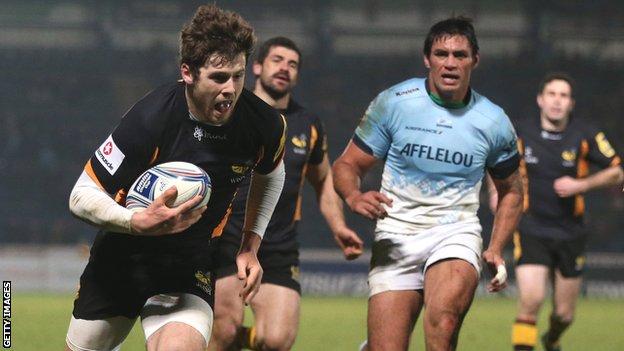 Wasps moved five points clear at the top of Pool 3 with a convincing victory over Bayonne in the Challenge Cup.

Joe Rokocoko's try on the stoke of half-time, converted by Jacques-Louis Potgieter, reduced the arrears to 17-7.

It was a 10th successive defeat on English soil for the French side, who remain second in the table on 11 points.

It was a tale of two kickers in the opening 16 minutes as Jones landed three from three to give Wasps a nine-point lead, but Potgieter missed two straightforward attempts at the other end.

Wasps dominated possession in the first half and it was a slight surprise that they had to wait until the 33rd minute to score their first try.

Teenager Billy Vunipola, who had such an influence in the opening exchanges, forced a turnover and the resulting move saw Daly go over for his fourth Challenge Cup try after exchanging passes with Tom Varndell.

Bayonne's Scott Spedding was sin-binned for a reckless challenge and Daly's 58-metre penalty extended the home side's lead to 17 points.

But the visitors closed the gap with their first real pressure of the game as Rokocoko went over in the left-hand corner.

Potgieter kicked the conversion to close the gap to 17-7 at half-time, but the French side were dealt a major blow at the break with Julien Puricelli being stretchered off with a neck injury.

Three Potgieter penalties, with Jones landing his fourth successful kick at the other end, meant the gap was closed to four points midway through the second half.

Vunipola was shown a yellow card for two dangerous tackles, but Masi calmed any home nerves when he powered through for a try.

Replacement Nicky Robinson added the conversion and a penalty to wrap up the victory.