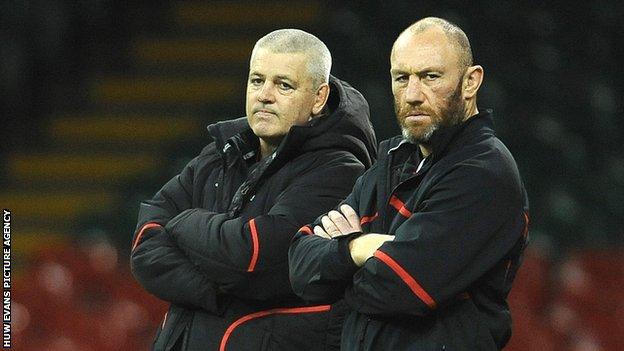 Wales forwards coach Robin McBryde will take over as caretaker head coach for next summer's tour to Japan.

McBryde will be assisted by Shaun Edwards, after the defence coach was not asked to be one of Warren Gatland's staff for the British and Irish Lions.

Wales play Japan on 8 June in Osaka and then 15 June in Tokyo, while the Lions tour to Australia is 1 June-6 July.

"I am delighted and extremely proud to have again been handed the honour of leading Wales," McBryde said.

"It is a privilege to coach my country and I will embark on this tour determined to get the best out of the squad against what I know will prove to be tough opposition."

Rob Howley has taken on the role of Wales coach for recent Tests when Gatland has been either on Lions duty or out of action following an accident.

But McBryde will now take the reins and will have Neil Jenkins, Edwards - who was an assistant on the 2009 Lions tour to South Africa - and newcomer Mark Jones, the former Wales and Scarlets wing, as assistants for the tour to Japan.

Inevitably there will also be Wales players absent on Lions duty against the Wallabies, meaning there will be opportunities for up-and-coming players.

During the last Lions tour in 2009, against South Africa, Wales undertook a tour to Canada and the USA where players of the calibre of Sam Warburton, Jonathon Davies and Craig Mitchell made their Test debuts.

"It is inevitable that some of our leading players will be on Lions duty but the last tour I took charge of proved that it is possible to identify and blood some stars of the future in these games," McBryde added.

"I already have a great coaching relationship with Neil and Shaun but I am really looking forward to working closely with Mark Jones, who fully deserves this opportunity to step onto the international stage."

Current Wales squad analyst Andy Hughes will lead the backroom analysts team in Japan in place of Rhys Long and Rhodri Bown, who will be in Australia with the Lions as will Welsh Rugby Union medical performance manager Prav Mathema.

Hughes will be supported by Marc Kinnaird, who is already a member of the WRU analysts department working with the Sevens squad. He will shortly join the Under-20s backroom team for their Six Nations tournament as part of his development within the structure.