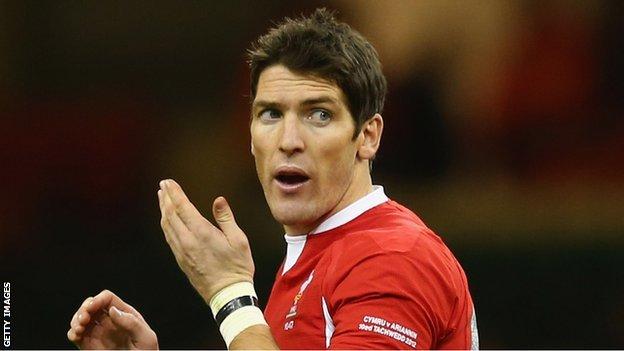 Scarlets fly-half Priestland is after undergoing surgery on a ruptured Achilles tendon.

"They picked him at 10 when he was not playing there for the Ospreys, and then they [Wales] don't pick him now he is playing 10 [for Perpignan]."

Priestland played in all the autumn series Tests, as Wales lost all four encounters to slip out of the International Rugby Board's top eight sides.

He completed 80 minutes against Argentina and Australia, started against New Zealand before being replaced by Hook after 68 minutes, and replaced the injured Dan Biggar after 38 minutes against Samoa.

But Priestland's injury in the Scarlets' Heineken Cup defeat by Exeter looks set to sideline him for up to six months.

While wishing Priestland well in his rehabilitation, Davies believes that the Scarlets fly-half has been struggling for form.

"It is very disappointing for Rhys Priestland," Davies added. "It is very unlucky, a bad injury and no one wants to see that. It will take a long time for him to come back and I wish him a speedy recovery.

"He has been worried about his game but when you are not playing well, sometimes you get rested and you can find your form again with your club. But that didn't happen with Rhys and unfortunately he had to do that in the public eye, playing for Wales."

Wales begin the defence of their Six Nations crown against Ireland on 2 February in Cardiff and Davies believes that Hook must start the campaign at fly-half.

Hook replaced the injured Jamie Roberts at centre after 24 minutes against Argentina in November, was not selected for the Samoa game and was unavailable on club duty for the final autumn Test against Australia.

"I don't know why they didn't select James Hook in the autumn Tests. Unless you are involved in that squad, it is difficult to say what their thinking is," Davies said.

"Whether it is because he plays in France, or whether they think he doesn't fit in structurally, I don't know.

"They know what Dan Biggar can do because he does it week in, week out, but I think this is an opportunity for Hook now.

"There is also Rhys Patchell at Cardiff Blues who is a very good player. He is only 19 but they might bring him in to see how he gets on in training.

"But in some of his decision-making I don't think he is ready yet. He hasn't played a lot of first-class rugby but they might bring him into the squad because he has shown a lot of potential.

"At the moment he is a promising young lad but he has got a great attitude, he is intelligent and I think he will learn very quickly."