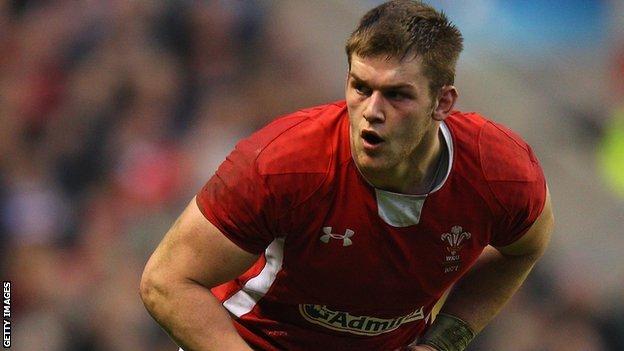 Dan Lydiate says he has not decided yet where he will play his club rugby after leaving Newport Gwent Dragons.

The Welsh region have announced the flanker, 24, will leave after seven seasons at Rodney Parade.

He has been linked with Racing Metro in Paris, but insists he "hasn't decided yet" which club he will join.

"I've just told the Dragons I'll be moving on," he told BBC Wales Sport. "I'm just focusing on getting fit and I'll make my decision in the new year."

It was a massive decision, it wasn't one done on the spur of the moment, it was done over some time

Lydiate is currently recovering from a fractured ankle suffered playing for the Dragons against Edinburgh on 27 September, which caused him to miss Wales' entire autumn Test series.

The blind-side was a star performer in the 2011 World Cup and was voted the 2012 Six Nations player of the tournament, helping Wales win the Grand Slam.

On Monday he was runner-up to Olympic taekwondo gold medallist Jade Jones in the public vote for the BBC Cymru Wales Sports Personality of the Year.

Lydiate says the decision to leave the region where he came through the ranks was not an easy one.

"I've been there [the Dragons] seven seasons now, I need a change," he said. "I want to push myself a bit further you know, I just want a new challenge.

"It was a massive decision, it wasn't one that was done on the spur of the moment, it was done over some time. It's just time for a change for me."

The Wales Grand Slam winners were named team of the year at the BBC Cymru Wales Sports Personality of the Year ceremony.

"It's a massive honour," added Lydiate. "Looking back and just to be part of the Grand Slam was something special, so to be nominated myself and win team of the year caps a really good season."