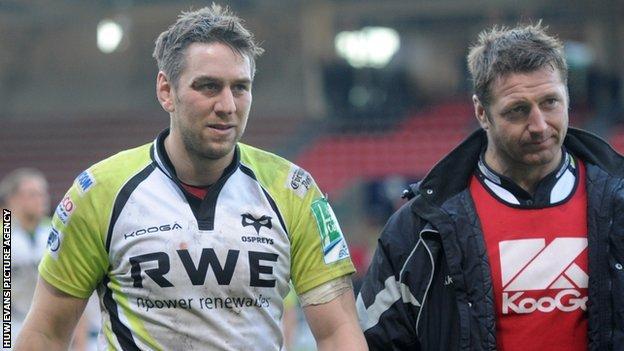 Former Wales wing Adrian Hadley believes Wales' rugby regions have shown they are too weak to succeed in the Heineken Cup.

After nine games in three 2012-13 rounds, only Ospreys among the three Welsh sides have won a game.

On Saturday the Scarlets succumbed at home to Aviva Premiership side Exeter, who won their first Heineken Cup game since making their debut in this season's competition.

Easterby said: "I'm sure that a lot of people will be happy that we haven't qualified because some of their predictions will have come true.

"And at the end of the day we're three from three and we've lost all of them and we can't hide from that.

"It doesn't help that preparations are what they are and we have to deal with that. There's no point making excuses."

Ospreys - who beat Treviso in October - lost on Saturday despite a brave effort at four-time tournament winners Toulouse.

On the same day, Newport Gwent Dragons won 33-0 at Italian side Mogliano's home in the Amlin Challenge Cup.

But the Dragons have already lost against Bayonne and Wasps in the second-tier competition and are unlikely to progress beyond Pool 3.

The Blues suffered a third successive defeat in the wake of Wales scrum-half Lloyd Williams' 25th-minute sending off in their 35-24 defeat by Montpellier.

But the former Cardiff RFC and dual-code Wales wing says overall the Welsh showing in Europe - which comes shortly after Wales' whitewash in the autumn internationals - has been below par.

He said: "It was not a good weekend for Welsh rugby was it?

"Ospreys obviously losing to Toulouse, which you would think would happen, but they put up a fair shout.

"The Scarlets were sloppy against Exeter; could have possibly won the game in the end, but didn't.

"And again the Blues... have been turned over comprehensively, but again from their own mistakes by having a player sent off after 20-odd minutes.

"So not a good weekend for Welsh rugby - a lot of injuries, so you could take that into account.

"But all in all our regions just aren't good enough at the moment."

He believes the Ospreys retain an "outside shot" at qualification from Pool 5 despite a return encounter against Toulouse at the Liberty Stadium to come on Saturday.

The Ospreys then face Leicester and Treviso in January, and could still finish among the three teams from the Heineken Cup pools to drop into the second-tier Amlin Challenge Cup, at the quarter-final stage.

On the same day the Blues are in Montpellier in Pool 6 while the Scarlets travel to Exeter in Pool 5.

Hadley added: "You've got to look at the expectations and the money that the French clubs are paying and the strength of some of the English sides.

"So it's very, very difficult and obviously if you don't qualify then your seeding points go down so you won't get seeded in the following year in the Heineken Cup."