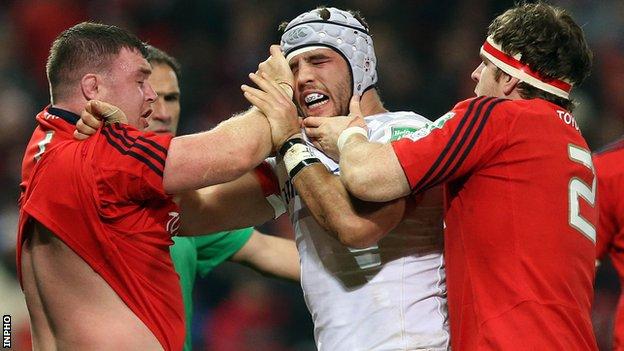 Ronan O'Gara kicked all Munster's points as they kept their Heineken Cup hopes alive by beating Saracens in a bruising Pool 1 clash at Thomond Park.

Munster led 9-3 at the interval and two penalties extended the lead to 15-6.

Will Fraser looked certain to score a Saracens try before being bundled into touch but Farrell's third penalty did earn the English club a bonus point.

The game started amid a tremendous atmosphere in Limerick with home fans knowing that a second pool defeat would probably end Munster's chance of qualification.

Rob Penney's side had put themselves under immediate pressure in Pool 1 following their opening day reverse against Racing Metro in Paris.

England stars Chris Ashton, Owen Farrell and Brad Barritt were back in the Saracens line-up after their heroics against the All Blacks although Charlie Hodgson remained at fly-half.

O'Gara kicked Munster into the lead with a fifth-minute penalty and Munster should have added to their advantage three minutes later as a charging Conor Murray attempted to find Simon Zebo instead of driving for the line himself.

Farrell was inches short with a chance to level on 14 minutes after Mike Sherry had gone over the top at the breakdown.

The game was already threatening to boil over and a melee involving several players resulted in both Donncha O'Callaghan and Saracens prop Rhys Gill being sin-binned.

Saracens' frustrations were being increased by a misfiring line-out although Munster were not taking advantage as they conceded a number of penalties in ruck situations.

O'Gara did add to Munster's lead in the 29th minute only for Farrell to reply in kind eight minutes later after the Munster front row had been penalised.

But with the Saracens line-out continuing to struggle, Ernst Joubert was ruled to have taken out O'Callaghan a minute before the interval which allowed O'Gara to restore Munster's six-point advantage.

After Farrell was once again short with a penalty from around the 40-metre mark three minutes after the restart, the England star did reduce Munster's lead with a successful kick two minutes later.

But given the titanic nature of the contest, Munster were in a degree of control by the 53rd minute after O'Gara had kicked two penalties within four minutes to leave nine between the teams.

Farrell missed a straightforward penalty chance in the 56th minute as his struggles with the boot continued.

Saracens looked certain to score a try in the 63rd minute as they had numbers out wide but Simon Zebo and Doug Howlett performed heroics to bundle Will Fraser into touch.

Farrell's third penalty six minutes from time did secure a bonus point for the Premiership club ahead of next weekend's return clash between the clubs in Watford.