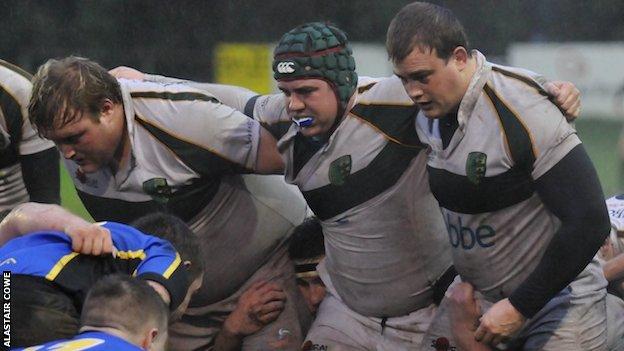 Guernsey boss Jordan Reynolds has blamed himself for the club's 30-9 home defeat by Westcombe Park.

Scott Davidson's three penalties were all Guernsey had to show as they stay seventh in National Three London.

"I take a lot of the blame myself, we had a game plan that we were going to use and it wasn't put across enough," Reynolds told BBC Guernsey.

"We'll look at that this week and see if we can change a few things and get a bit more comfortable."

Trent Nattrass's try in the opening minute for Westcombe Park set the visitors on their way and they were 10-0 up soon after thanks to a Luke Giles penalty.

Davidson kicked two penalties before Giles got one back to see Westcombe lead 13-6 at the break.

Davidson brought Guernsey to within four points before Ben Hough and Chris Lewis went over for the fifth-placed visitors as Giles kicked seven more points.

"I probably didn't expect it to be that kind of result, I thought it would be a lot closer," Reynolds said.

"There wasn't much in it, we had a couple of opportunities to score, we just didn't put them away.

"It was one of those days that the mistakes we were making were simple mistakes and that doesn't normally happen.

"I've got to look at myself and the way I tried to put it across, I can't blame the players for that."