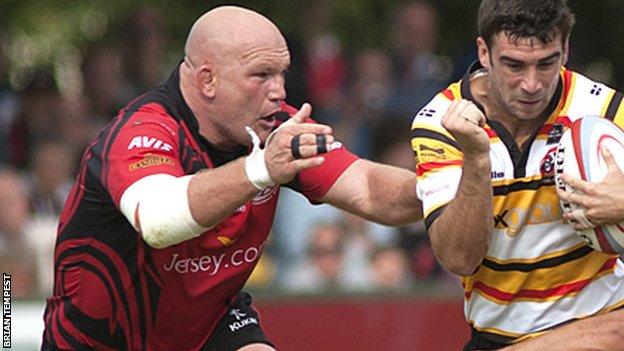 Player-coach Ben Evans's departure from Jersey was an amicable one, according to director of rugby Ben Harvey.

Jersey revealed on Thursday that after 18 months.

The club said the decision had been reached by "mutual consent".

"It's not been an easy decision, but there's not been anything that's caused anything but an amicable split," Harvey told BBC Radio Jersey.

"We're sorry to see him go, the decision was a very tough one, but made for the right reasons."

Evans signed for Jersey in the summer of 2011 and helped the islanders secure promotion to the second tier of English rugby.

But in recent weeks he had not been in Harvey's starting line-up and had been concentrating on his duties as forwards coach instead.

Club officials discussed the "challenges" of Evans's dual-role before announcing his departure.

"Ben has got other things he wanted to pursue as well and he and I felt it was time for him to go on and do something else," said Harvey.

"He's got several irons in fires. Anything Ben turns his hands to he'll be successful at.

"He's a very likeable guy. We can all still count him as a friend here."

Evans leaves with Jersey battling to avoid relegation, bottom of the Championship table and three points adrift of Moseley and Doncaster Knights.