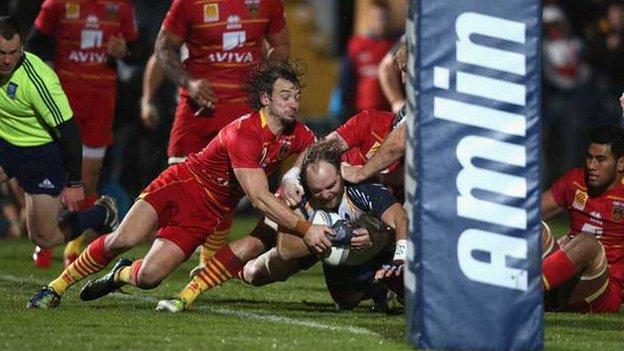 Worcester coach Richard Hill says that the last-ditch win over main Amlin Challenge Cup rivals Perpignan shows how far his side have come this season.

Thursday night's 22-21 victory, earned by Andy Goode's 78th-minute penalty, contrasts with when they two lost leads late on at Sixways in September.

"The squad now has much more confidence in itself," Hill told BBC Sport.

"I just feel like they are starting to believe they can win against anybody. That is such a vital thing to have."

After Olly Barkley kicked a last-minute penalty to earn Bath a 24-23 win at Sixways on the first day of the season, Gloucester's Freddie Burns then did the same a fortnight later to once again deny Worcester victory and earn a 16-16 draw.

But they have since won their last seven home games at Sixways - and Hill admits that his players have toughened up mentally.

"The passion, desire, belief and confidence is beginning to flow through the club," Hill told BBC Hereford & Worcester.

"It was the attitude of the players I was pleased with.

"You can do all the work you can on the training ground with strategy and skills.

"But the hardest thing for any coach is to get that hard-nosed steely winning attitude, that 100% you think you're going to win.

"It takes a long while to get a group of players to feel that way that, even against a team like Perpignan, they can take them on and believe they can beat them."

Hill also hopes that better weather in the south of France for next Saturday evening's return game (15 December, 20:00 GMT) might encourage a more expansive game. And he is confident that his team can stretch their hosts out wide.

"If you are going to beat Perpignan, you've got to nullify their scrum and their maul, which we did except for the first 20 minutes of the second half," added Hill.

"And I saw plenty of opportunities to go wide.

"If we can do the same on a better pitch in Perpignan, then we can do some damage with the likes of Nikki Walker and David Lemi.

"If we'd have lost, we'd have then needed to pick ourselves up going to Perpignan, but this victory gives a chance."