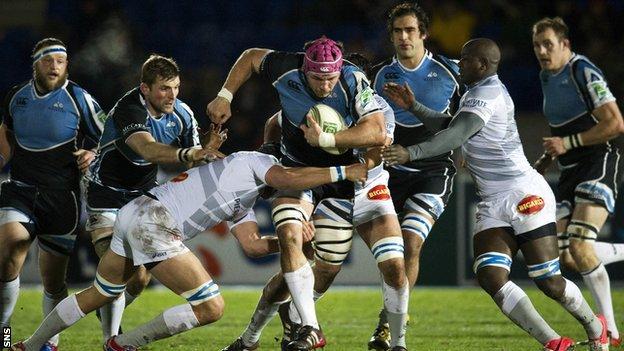 Glasgow Warriors slumped to their third straight defeat in Heineken Cup Pool 4 as Castres boosted their chances of progressing to the quarter-finals.

But Wight missed a penalty early in the second period and Kockott capitalised by kicking the visitors ahead.

And though Gregor Townsend's side pick up a bonus point, they are now seven behind second-place Castres.

The French outfit overtake Northampton Saints, who were beaten 25-6 by runaway leaders Ulster.

Kockott missed a penalty either side of Wight's first successful kick but the South African levelled before Wight edged Glasgow ahead again.

Another Kockott miss preceded his second successful penalty on 36 minutes.

It was Wight's turn to miss seven minutes after the break and the wayward kick from the Castres 22 is sure to haunt the Scotsman.

The scrum-half missed with his next attempt but it mattered little as Glasgow could not overturn their deficit.

And the hosts were dealt a further blow when captain Al Kellock went off with an arm injury.

Neither side seriously threatened to get over the try line and they will meet again at Stade Pierre-Antoine on 16 December.