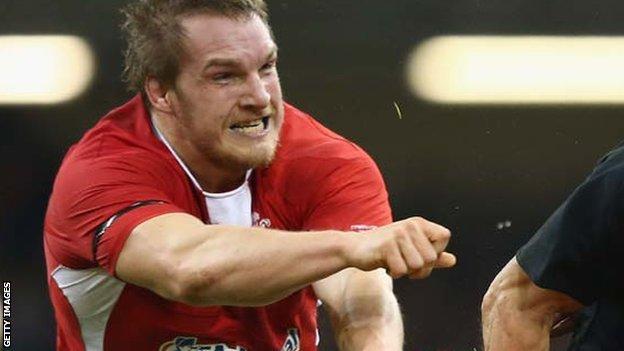 Gethin Jenkins will return for Saturday's autumn series climax against Australia in Cardiff as one of four changes to the beleaguered Wales side.

Jenkins replaces Paul James, who is unavailable, and will be joined in the front row by tight-head Scott Andrews.

Lock Ian Evans returns from injury to replace Bradley Davies (concussion) and Aaron Shingler is preferred at flanker to Ryan Jones, who is on the bench.

Dan Biggar, Ryan Bevington and Samson Lee are the other new replacements.

Scarlets prop Lee will win his first cap should he be called into action, a day after he celebrates his 20th birthday.

"Australia are a devastating side when they play off turnover ball and that is a big challenge for Wales. If David Pocock plays, he is outstanding in everything he does in his decision-making around the breakdown. He gets so low over the ball that he is almost immovable.

"They base a lot of their game on turnovers, which allows their dangerous backs to run in broken play. Pocock brings them that but if he doesn't play, they have another guy in Michael Hooper who is almost as good."

Biggar is back after a shoulder injury to replace Perpignan's James Hook, who has joined Bath prop James in being recalled for club duty as the match falls outside the International Rugby Board's window for international matches.

Loose-head prop Jenkins, though, has been released by Toulon to earn his 94th cap in what will be his first start since the defeat by Argentina that launched the winless autumn series.

The British and Irish Lion, a mainstay in the Wales front row for many seasons, had conceded that losing his place to James had been a "kick up the backside".

Wales have also negotiated the release of scrum-half Mike Phillips (Bayonne) and lock Luke Charteris (Perpignan) from their respective French clubs to play.

Despite an admission of poor form and dwindling confidence, Rhys Priestland retains the fly-half jersey in an unchanged backline since Saturday's 10-33 defeat to New Zealand.

That match has deprived Wales of lock Davies after he was knocked unconscious by All Black hooker Andrew Hore, who has subsequently been banned for five weeks.

Tight-head prop Aaron Jarvis, the third-choice following the loss of Adam Jones and Craig Mitchell, was also injured and has been ruled out for the rest of the season with a knee injury.

Wing George North has also failed to recover from the hip injury he picked up in training last week that forced him to drop out of the side to face the world champions, but Jamie Roberts has shaken off a hip problem that curtailed his involvement on Saturday.

Australia's visit to the Millennium Stadium gives Wales an opportunity to secure their first win of the autumn following defeats to New Zealand, Argentina and Samoa.

The match has taken unexpected added significance as Wales need to avoid defeat to stay inside the top eight in the world rankings, which will secure a more favourable draw for the 2015 World Cup group stages, which will be made on 3 December.

"We need to pick up again where we left off in the second half last week," said Wales head coach Warren Gatland.

"We managed to retain 73% possession after the break against the All Blacks and win the territory battle, and we need to put Australia under similar pressure from the outset."

Australia have beaten Wales four times in the past 13 months, including a 3-0 whitewash in a Test series in Australia in June.

Flanker David Pocock after missing the defeat to France and victories over England and Italy, but lock Sitaleki Timani is banned.

Gatland added: "We have played them regularly over the last couple of years and have come close to winning on a number of occasions, but have not quite been able to get ourselves over the chalk of the finish line.

"Both sides have had injuries to cope with, but there is every reason for optimism."