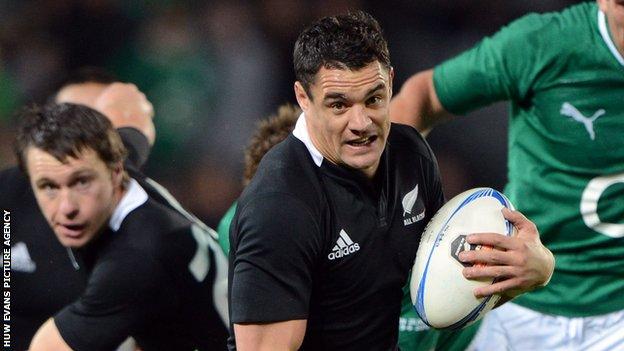 New Zealand fly-half Dan Carter has been forced out of Saturday's match with Wales because of an ankle injury and will be replaced by Aaron Cruden.

Carter, who has scored 162 points in nine appearances against Wales, pulled up with the problem during an All Blacks training session on Thursday.

He was taken to a Cardiff hospital on Friday morning, where scans revealed the extent of the damage.

Cruden, who has not lost in 18 games for the world champions, has been promoted from the bench to be Carter's replacement.

"It is something you can't control," New Zealand captain Richie McCaw said about the absence of Carter, who is the all-time leading points scorer in Test rugby with 1,381.

"It is disappointing for Dan, but the next guy will come in and we will try to give him some good ball to operate with.

"Aaron has played a few Tests, some pretty big games.

"Dan is a pretty good footballer, 90-something Tests. He is hard to replace, but we have got to get on and have belief in the next guys."

Carter was one of eight changes made by New Zealand to the team that beat Italy 42-10 in Rome last Saturday.

The previous weekend, he was named man-of-the-match in the 51-22 thrashing of Scotland at Murrayfield.

He kicked 21 points and had a hand in three of New Zealand's six tries.

Carter has suffered from injury before, most notably when his 2011 World Cup campaign was cut short, but the All Blacks went on to lift the Webb Ellis Trophy despite losing him during the competition's pool stages.

Cruden started in the semi-final victory over Australia in Auckland, and then started the final against France before he was forced off just before half-time by a knee problem.

Wales suffered disruption to their plans when wing George North withdrew from the side on Thursday with a hip injury.

He has been replaced by Scarlets colleague Liam Williams.