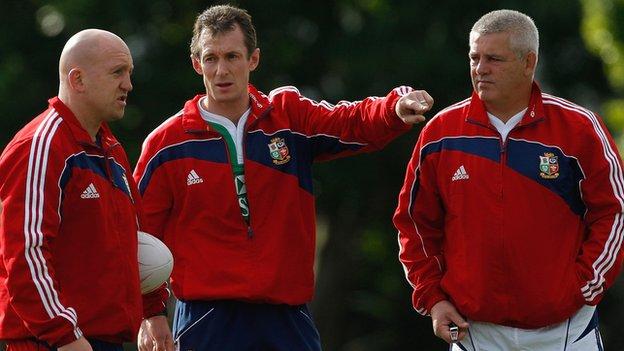 Gatland will take over from interim coach Robert Howley for Wales' games against New Zealand and Australia after defeats against Samoa and Argentina.

Should the union have said, '[Gatland] can go away to the Lions after the autumn Tests'? Because the autumn Tests are crucial for us because of world rankings and World Cup pools

"I don't care how the Lions get on," ex-Lions skipper Thomas told Scrum V.

"I'd rather Wales be drawn well in the World Cup, do well in the autumn series and Six Nations."

"So if Gatland being away has hampered it, then to me it's the wrong decision because my country, Wales, comes first to me."

In the wake of the 10 November loss to Argentina, Wales defence coach

But Thomas, who played 100 games for Wales at centre, wing and full-back, and also took over from injured skipper Brian O'Driscoll on the 2005 Lions tour to New Zealand, fears the situation has contributed to the Welsh slump.

Davies is also concerned that Wales' 2015 World Cup ranking has suffered as a result of Gatland's absence, which was endorsed by the Welsh Rugby Union.

International Rugby Board rankings published after the autumn Tests in Europe are finished will form the basis of the 2015 World Cup draw.

The latest update to those rankings is scheduled to be made public at lunchtime on Monday, 19 November.

The provisional list shows Wales in eighth, narrowly ahead of Friday's victors in Cardiff, Samoa.

Former dual-code Wales skipper Davies believes the WRU should have insisted Gatland be in charge of all Wales' autumn games because of World Cup draw's importance.

"When you look at it... should the union then have said, 'you [Gatland] can go away to the Lions after the autumn Tests'?

"Because the autumn Tests are crucial for us because of world rankings and World Cup pools."

However, former Wales hooker Garin Jenkins believes the impact of Gatland's absence is being overstated.

"I think we're highlighting that fact too much," said Jenkins.

"There's lots of factors. There's injuries and we're not on top of our game at the moment."

With 58 international appearances, Jenkins is Wales' most-capped hooker, and he says Gatland's coaching staff and players are responsible for the poor performances against Samoa and Argentina.

"I should imagine policy doesn't change regardless who's there, and it's the execution of the policy that you have in the team [that is important]," he said

"Whether it's your lineout functioning accurately, passing, your defence... I think a head coach just oversees that and directs that.

"I think the implementation of those things are carried out by the staff and executed by the players on the field."

"We're papering over the cracks aren't we?

"Just to say what we're hitting on at the moment - should he [Gatland] have gone, should he stay, I think is missing the point slightly."

Howley's stint as caretaker coach began earlier than planned after Gatland suffered a double-heel break in a domestic accident in May.

The Welshman's temporary term began with victory against the Barbarians in June, then three defeats against Australia down under.

Defeats by the Pumas and Islanders have taken Wales to five games without a win - their worst run since 2010, when Gatland was in total charge.

Howley will reclaim the reins for Wales' 2013 Six Nations and Grand Slam defence.