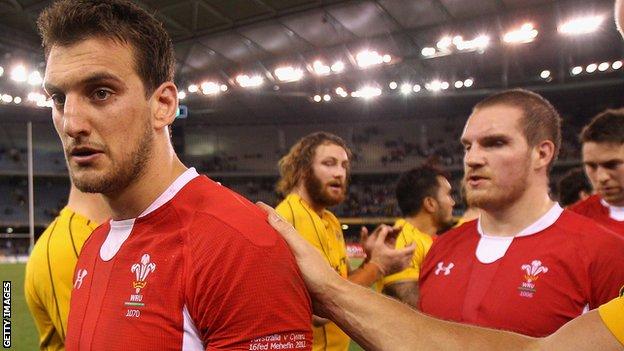 Captain Sam Warburton says Wales must target four victories this autumn if they have serious aspirations of winning the 2015 World Cup.

"We have to be ambitious, go for four out of four," he told BBC Radio 5 live before Saturday's Test with Argentina.

"If you look at the great northern hemisphere sides like England in 2003, they beat the big three [New Zealand, Australia, South Africa] on the bounce.

Wales have not beaten one of the world's top three sides for four years - their last victory over one of the old Tri-Nations sides coming against Australia in November 2008.

Since then they have lost 14 consecutive games against the Wallabies (seven), All Blacks (four) and Springboks (three), with six of those defeats by four points or fewer.

Their only success against southern hemisphere opposition in that time was a pre-2011 World Cup warm-up win over Argentina and a 17-13 win in 2009 over Samoa, who follow the Pumas to Cardiff as Wales' second autumn opponents, before New Zealand and Australia.

But despite injuries to three of their Grand Slam-winning pack in Adam Jones, Dan Lydiate and Ryan Jones, Warburton remains confident his side can turn those narrow losses into victories.

"The squad is in a place now where we are full of confidence and belief," he added. "We don't want any of those doubts creeping in the longer it takes, but I don't think they will.

"We are an ambitious group of boys and the coaches are great at motivating us.

"There is an inner confidence in the squad and the players are as fed up as I am sure the public and media are, waiting for this scalp. Hopefully we can get that win sooner rather than later.

"Four games on the bounce against quality opposition is going to be tough, but we are really looking forward to it and we have to go for four scalps really. These games will be vital for [World Cup] seedings and confidence as well."

Listen to the full interview with Sam Warburton and a preview of the autumn Tests on 5 live Rugby on Thursday, 8 November from 21:00 GMT.