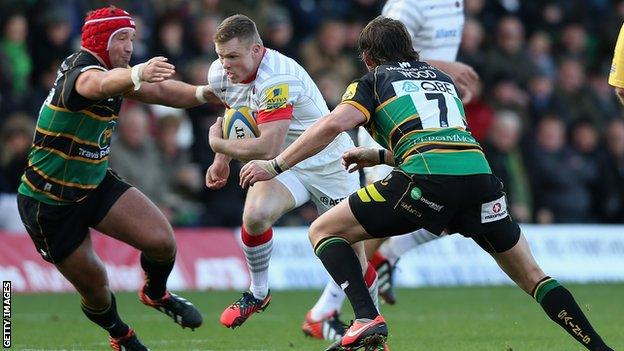 Saracens knocked Northampton off the top of the Premiership with a businesslike win at Franklin's Gardens.

Owen Farrell and Stephen Myler exchanged three points early on before Alex Goode crossed for the only try of the game, which Farrell converted.

Ryan Lamb booted Saints to within four points after the break but the hosts tried to force their game in vain.

A first home loss of the season for Saints was compounded, and will cause for concern for England, by knee injuries to skipper Dylan Hartley and Courtney Lawes - with Myler also forced to leave the field.

Sarries' victory, their seventh in eight Premiership meetings with the east Midlanders, was built on solid defence.

Farrell put the visitors ahead on eight minutes with a kick from halfway before the Pisi brothers combined to put Saints into their opposition 22 from where Myler, again playing at full-back, levelled.

England winger Chris Ashton, on his first return to the Gardens after his summer exit, upset the home support when he took out Vasily Artemyev with a quarter of the game gone.

The former Wigan man broke down the right wing and his inside pass sent Goode over.

Farrell converted before Saints were forced to take Lawes and Myler off with injuries.

Hartley failed to emerge for the second half but the home pack won a penalty against Sarries' scrum which Lamb converted to make it 10-6.

The visitors were dominating the breakdown and their defence earned them another penalty for Farrell to make it 16-6 with 12 minutes to go.

Charlie Hodgson came on and weighed in with a try-saving tackle late on after Tom May looked to have sent Artemyev clear.

"We pride ourselves on the defence.

"It is an easy way to demonstrate the unity of the squad. When things get tough we can rely on having a friend to the left and to the right to fight for each other and get that turnover when we need it.

"I thought we played a lot of good rugby and it was very disappointing we went in at half-time seven points down.

"In the second half, we never really got into it. With a bit more accuracy and luck, we could've won that game. So we're not going to get disheartened.

"We did have chances where we forced ball and didn't look after it. That's a lesson for us.

"Courtney Lawes and Dylan Hartley have both got knee injuries, and Stephen Myler came off with a hamstring injury, so that's disappointing and we'll have to check how they are."