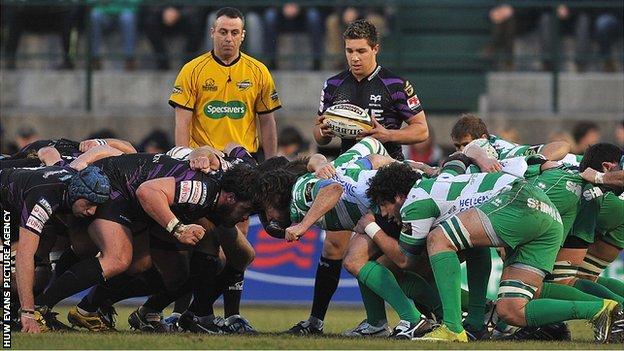 Ospreys are to bolster their front-row options with the signing of versatile Moldovan international Dimitri Arhip.

The 23-year-old has signed an initial deal with the Welsh region until the end of the season, subject to Arhip obtaining a work permit.

Arhip, capped 19-times by Moldova, has an option to extend his stay with the Pro12 champions for a further year.

"Dimitri will be with us at the start of November," said Ospreys rugby operations manager Andy Lloyd.

"And his arrival will be quite timely as we are likely to lose a number of front row players to international duty.

"When that is the case, it's important to ensure we have the strength of depth that will allow us to remain competitive as a group regardless of international commitments.

"With the size of our contribution to the Welsh squad we felt that it was appropriate to bring Dmitri in.

"His versatility will be a huge asset as he will cover three positions, giving the coaches extra options. He is an immensely strong, powerful player, and we are looking forward to welcoming him to the region."

Arhip - who can play loose-head, tight-head or hooker - began his career at Kishniev Blue Marine before moving to Dinamo Bucharest in Romania, where he won the national title, before transferring to Russia to play for Yenisey-STM Krasnoyarsk, helping them to the 2011 Superleague title.

The 5ft 8in and 17st powerhouse is currently involved in the end of season play-offs in Russia and will arrive in south Wales following the Russian Superleague final at the end of the month.