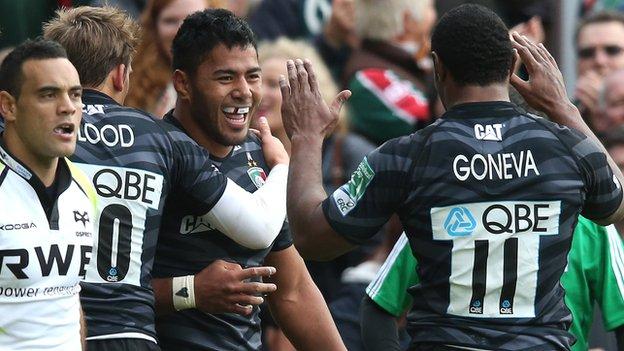 Superb displays from half-backs Toby Flood and Ben Youngs helped Leicester fight back from an early 10-point deficit to beat Ospreys and get their Heineken Cup campaign back on track.

Tries from Ryan Jones and Manu Tuilagi helped make it 10-10 at half-time.

But in the last 10 minutes Flood, Youngs and Tuilagi, with his second try, all crossed to earn the Tigers what may prove a vital try bonus point.

It was a spectacular finish to a game which had been nip and tuck for the first 70 minutes and it lent the scoreline a mis-leading look.

In the end the greater power of the Leicester pack gave England halves Flood and Youngs the chance to twist the knife and they relished the opportunity as Leicester made it 19 games unbeaten in the Heineken Cup at Welford Road.

After last week's loss at Toulouse only a win would have done for the Tigers and they will be pleased not just to have earned five points for themselves but also to have denied Ospreys a losing bonus point.

Leicester and Ospreys have plenty of history in Europe's premier club competition. This was their seventh meeting - Leicester led 3-2 with one draw going into the match - and their last meeting at Welford Road had ended in a 32-32 draw.

Ospreys started the season very slowly but they went into the game on the back of four straight wins and were quickly out of the blocks in the east Midlands, scoring the first try of the game inside two minutes as blind-side flanker Ryan Jones dotted down from short range.

Biggar converted and added a penalty from distance after 13 minutes, but as the half wore on Tuilagi started to make inroads for the Tigers and with winger Vereniki Goneva popping up all over the field Leicester began to look dangerous.

Just over 10 minutes before half-time Flood popped over a penalty after Wales tight-head prop Adam Jones was harshly penalised at scrum-time.

But although that might have been fortunate, Leicester's pack were showing clear signs of gaining the upper hand in the both scrum and line-out and they levelled the score with a superb try.

Fiji winger Goneva made the initial incision off Flood's inside pass and Ben Youngs and Anthony Allen combined to send the grinning Tuilagi ambling over, with Flood converting from out wide to make it 10-10.

The momentum was firmly with Leicester and Ospreys' task was made harder when they had loose-head Ryan Bevington yellow carded for persistent infringements.

But although Flood kicked the Tigers into a 19-13 lead they could not shake off the visitors and two penalties from Biggar - to add to one just after the break - levelled the scores once more after an hour.

Given Leicester's edge up front it seemed an unlikely scoreline and, after Flood had edged the hosts back in front with a monster penalty from his own half, the Tigers finally pulled clear in the last 10 minutes.

Flood started the late fireworks as he picked off a Biggar pass and raced 50m to score, before adding the conversion, to give Leicester some breathing space.

And first Ben Youngs and then Tuilagi scored out wide as the two-time European champions confirmed they have every intention of mounting a serious challenge once again this season.

Views from the changing rooms

"We know Ben Youngs is an outstanding player. He is one of the biggest threats around when he makes those calls right.

"Last week, in a certain circumstance [taking a quick tap penalty against Toulouse], he made the wrong decision. He knows that.

"It was the result we needed. The attitude of the players was outstanding. At 10-0 down we kept our composure really well and played ourselves back into it.

"Ospreys started very strongly, but we got back into it and the tide started to turn."

Ospreys coach Steve Tandy: We didn't perhaps have the rub of the green and it was disappointing the way we went to some options, but that's something for us to get to as a group.

"Towards the end, to get four tries out of us didn't really reflect the game.

"When you come away to venues like Leicester you're never going to have it your own way - it's about how you deal with the situation.

"At 19-19 with 10-12 minutes to go we felt we were in a good place and could go on to win the game. But we stand here without a point and that's really disappointing."