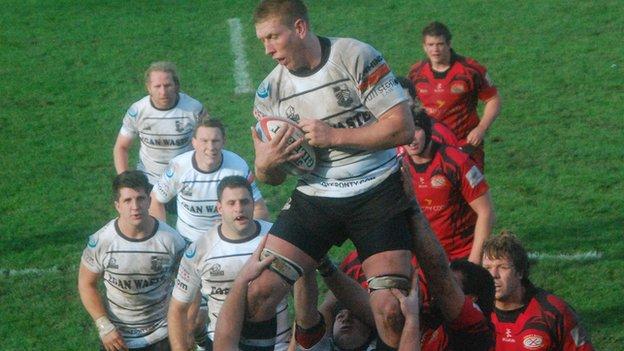 Jersey and Pontypridd started their British and Irish Cup campaign with a 20-20 draw at St Peter.

The Welsh Premiership champions were first to touch-down when Craig Locke went over against the run of play.

The hosts led 13-7 at the break though when Nicky Griffiths scored before Dai Flanagan's penalty and drop-goal squared the match.

Jersey went back in front thanks to a penalty-try but Tom Pascoe scored late on to secure the draw.

It means Jersey are still without a win this season but this was the first time they had avoided defeat.

Michael Le Bourgeois' penalty had given them an early lead before Locke scored Ponty's opener.

Scrum-half Griffiths impressed throughout and his converted try on the stroke of half-time came off the back of a scrum five metres from the line.

After Flanagan's boot had pulled the game level the hosts went in search of a second try and after intense pressure, and three infringements at the scrum, referee Nigel Correll gave the penalty-try.

There was still time for the Welsh side to level the game though when replacement Tom Pascoe raced onto a grubber kick to touch down before hobbling off injured.

Flanagan stroked home the conversion to ensure his side travel back from the Channel Islands with a share of the points.

"In patches we did some really good things," said Jersey director of rugby Ben Harvey.

"The boys should be confident, because they put in a decent performance and against a very good side came away with a draw that we should have won.

"Self belief keeps growing, it was a decent result but we're a bit disappointed we didn't get the win."

The teams had gone into the game with contrasting league records. Jersey have lost all six of their Championship matches while Ponty have won all six of their Principality Premiership fixtures.

"We thought it was quite a dire game governed by set pieces.

"We're happy to come away and not lose but we we're disappointed with our performance because we wanted to show we're a good side."

The other teams in Pool Five, Leinster and Leeds Carnegie, meet in Dublin on Saturday night.