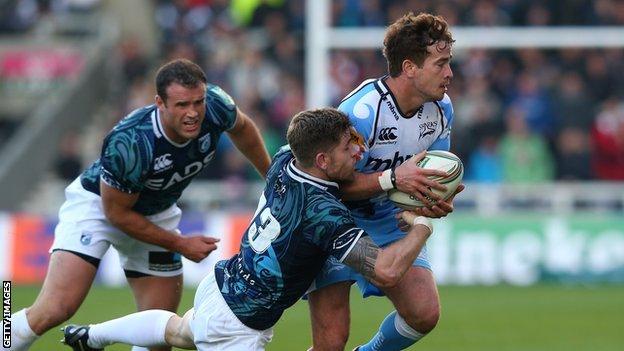 Sale put their Premiership misery to one side and got their Heineken Cup campaign off to the ideal start thanks to a thrilling Danny Cipriani-inspired comeback win over Cardiff Blues.

Blues looked to be coasting as they took control with a ruthless attacking display and three Alex Cuthbert tries.

And late tries from Mark Jennings and Tony Buckley, plus solid kicking from Rob Miller, secured an unlikely win.

Toulon top Pool 6 after their English contingent inspired them to a 37-16 bonus-point victory over French rivals Montpellier.

Cipriani has debut to forget

Blues had seemed certain victors when they led by 15 points heading towards the final quarter at Salford City Stadium.

But the second-half introduction of England's forgotten man Cipriani breathed new life into a predictable Sale backline and his energy and quality guided the hosts to a pulsating victory.

Sale, who prop up the English Premiership after losing all six of their games so far, dominated possession and territory in a scrappy opening period but wasted two glorious openings.

Despite the pressure, the visitors were first to get on the scoreboard, courtesy of a kick from his own half by Halfpenny.

Sale responded with a penalty of their own from Nick McLeod.

But the Welsh side, deprived of the services of Wales captain Sam Warburton from the sixth minute because of a dislocated finger, suddenly sparked into life with a devastating spell of attacking rugby that produced two tries in three minutes.

Cuthbert scored the first following a fine charge by Jamie Roberts and a quality short pass from Ceri Sweeney.

And a delightful move involving almost half the team culminated in Cuthbert running in a simple second in the right-hand corner.

Sale regrouped and, having earlier opted to run when presented with decent opportunities to kick at goal, McLeod added two further penalties to bring them back to within eight points at 17-9.

But more careless play by the home side gifted possession to Blues and they again made the most of it.

Hooker Marc Breeze burst through deep into Sale territory and delayed his pass to Cuthbert, who completed a simple hat-trick.

The faultless Halfpenny added the two points and then converted another long-distance penalty after the interval - but Sale still refused to cave in.

The Sharks continued to match the visitors in terms of possession but lacked the creativity to break a resolute defence until Cipriani appeared on 49 minutes.

His quality soon made an impact as he started and finished a sweeping move to go over for Sale's opening try.

Halfpenny slotted another long-range kick for the visitors but Cipriani was again involved as a slick move in the backs ended with Jennings running around behind the posts for a converted try.

That took Sharks to within six points and, with the momentum in their favour and Lewis Jones sin-binned on 73 minutes, they secured the win against an increasingly edgy Blues.

A Miller kick and close-range score from Buckley after a spell of sustained pressure put them ahead for the first time, and they held on to win by a single point.

"It was great for Danny to perform like that and hopefully it will give us a huge confidence boost. Hopefully Danny and the team can kick on from that.

"His attacking flair has never been in question, but he had three great kicks for field position and he made his tackles when he needed to, and that was just as important.

"It's been a tough six weeks. We've taken a lot of flak, quite rightly so in many ways, but hopefully we can turn the corner. The next two games are huge for us."

"The platform up front was pretty good and with the ball in hand in the first half we were pretty clinical.

"We just weren't consistent enough, particularly in the last quarter of an hour."

Replacements: Copeland for Warburton (6), Trevett for Bourrust (49), Kyriacou for Breeze (50), Jones for Williams (70)

Not Used: Andrews, Down, Davies, Fish.