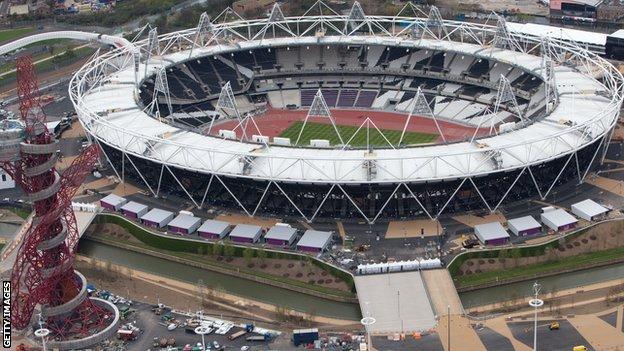 The Olympic Stadium and five Premier League football grounds have been confirmed as potential match venues for the 2015 Rugby World Cup.

Just three of the 17 shortlisted are rugby venues: Gloucester's Kingsholm, the Millennium Stadium and Twickenham.

The home grounds of Manchester United, Newcastle, Sunderland, Aston Villa and Southampton are all on the shortlist.

The city of Leicester is still represented by the King Power Stadium, which has a capacity of more than 32,000 and tournament organisers believe it has more suitable off-field facilities than Welford Road.

However, in a statement, the Tigers said they were "hugely disappointed" by their omission.

"Welford Road has hosted many major occasions over the years, including visits from South Africa, Australia and Argentina national teams in recent seasons. It is home to the best-supported and most successful club in the history of the professional game in this country and, as such, we believe is worthy of Rugby World Cup status," chairman Peter Tom said.

"That the organisers of RWC2015 do not think this an appropriate venue for its fixtures is disappointing and confusing - both for the professional club game in this country and for its supporters."

The final list of 10 to 12 venues will be finalised early in 2013 after the tournament match schedule has been formulated. The pool draw is being held on 3 December in London.

The tournament's organisers, England Rugby 2015, must sell 2.9 million tickets to cover the £80m guarantee owed to the International Rugby Board.

Andy Cosslett, ER2015 chairman, said: "We are confident that, with the venues selected, we will be able to reach our target of having up to 2.9 million tickets available - opening up the tournament to more people than ever before and in turn delivering the biggest and best Rugby World Cup there has ever been."

Rugby Football Union chief executive Ian Ritchie said Leicester, like all clubs, would benefit in other ways from England staging the Rugby World Cup - but pointed out that the ground did not meet the necessary criteria to stage matches.

He added: "I would be very disappointed as well. They do a great job, they are a fantastic club. I can understand their disappointment but I think you've got to look at what were the facts of the review and the audit that went on."