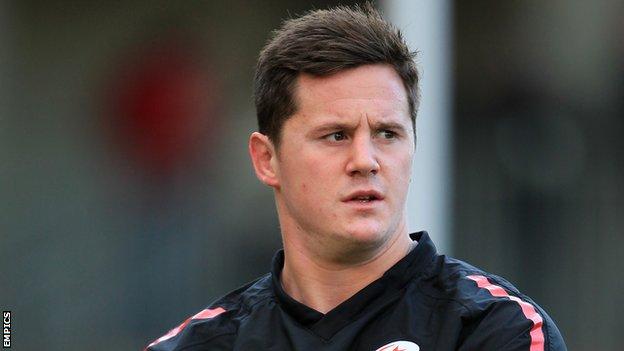 Andy Saull believes he can put himself back into England contention once he has regained his form for Saracens.

The open-side flanker will make his first start for six months when Sarries take on London Welsh on Sunday.

Saull, 24, was considered a strong contender for England's summer tour of South Africa before he dislocated his knee against Sale Sharks last March.

He told BBC Three Counties Radio: "If I can get into form for my club hopefully I can get back into England favour."

And Saull admitted that he had found his first long-term injury a frustrating experience.

"At first you try and be really positive and say 'OK, I'll try and get as big as I can, get my body into brilliant fighting shape,' but it was a strange sort of period because there were a series of deadlines and I couldn't progress to the next stage of fitness until I'd met them - so there were good weeks and bad weeks," he explained.

"Seeing who went on the South Africa tour, there were guys I was playing above in the England Saxons set-up, so I'd have fancied my chances [of being selected] if I'd stayed fit.

"But you can't dwell on 'what if's', you just have to get back into form and hopefully into favour."

Despite racking up over a century of appearances for Saracens, Saull points out he has only just turned 24.

They've already shown they know how to compete, make life tough for their opposition and go on and win games. We know it could be scrappy

"Because I've played as many games as I have people forget that in international terms I'm still a youngster, so in that respect time is still on my side," he said.

But despite his experience, Saull admitted he was as nervous as he has ever been before a match when waiting to come on as a late replacement in last week's win against Harlequins.

"I haven't been that full of anxiety for a long time, but once I was out there, for ten minutes you fly around and smash everything.

"It was awesome to get back into the swing of things, hitting people and getting hit.

"Even better, after a defeat and a draw in our previous games, to beat Quins and shut them out in a tight game was very pleasing. Their attack had been looking brilliant, but we said during the week they'd yet to come up against a defence like ours."

Saracens themselves have not scored a try for over four hours of playing time, but Saull said the side would remain patient against newly promoted opponents London Welsh, who they face on Saturday.

"It's one of those games where you can't force it," he said.

"They've already shown they know how to compete, make life tough for their opposition and go on and win games.

"We know it could be scrappy. We have to do our job in the set-pieces, and really have a go and try and break them physically."