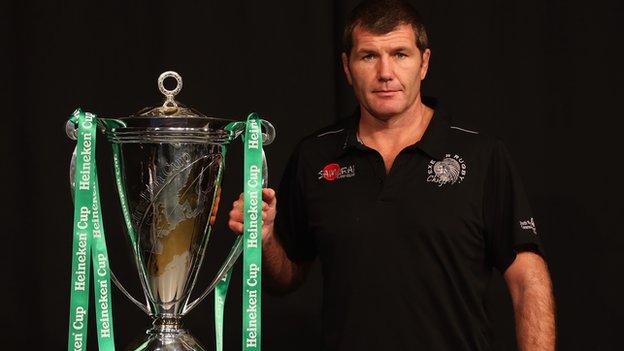 Exeter Chiefs boss Rob Baxter says his side are relishing the prospect of testing themselves in the Heineken Cup.

Baxter's side make their competition debut later this month and he believes they will benefit from the experience.

"You improve massively by playing against quality opposition and quality players," Baxter said.

"This is the next step up and an opportunity for our guys not only to experience something new, but to develop as players and as a team."

Exeter, who are in just their third season in England's Premiership, have been against reigning champions Leinster, French powerhouse Clermont Auvergne and Scarlets.

The Chiefs will enter the competition on 13 October off the back of a tough run of Premiership fixtures having faced Saracens and Leicester in the past fortnight and with champions Harlequins waiting for them this weekend.

"No other Exeter team might face this set of fixtures ever again," Baxter said.

"In our first six games, plus the first two rounds of the Heineken, we'll play the top four in the Premiership and two of the best teams in Europe.

And Baxter says the club that he has been associated with throughout his life deserves its chance to perform on the biggest stage.

"I played in a couple, and at the time they were heartbreaking. But you look back and the reality is that they were the little steps we needed to take.

"One of the final steps in the jigsaw was winning the Championship play-off and now working hard to establish ourselves in the Premiership.

"We've tended to do well in big, difficult circumstances and I've got to hope again that it brings the best out of us. We enjoy the experience and we come out of it a better team."